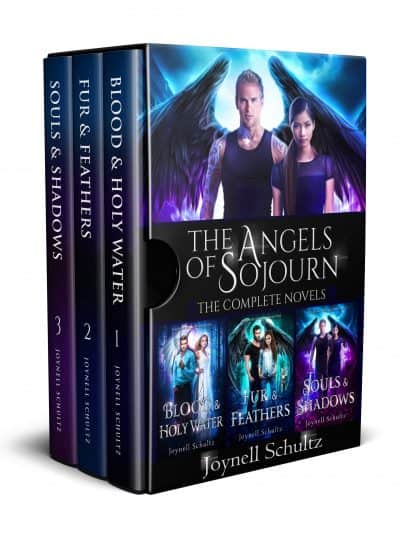 Not every angel deserves their halo. What does it take for an angel to fall? Binge this boxed set to find out! Set contains three romantic urban fantasy novels, each with their own gritty murder mystery.

Not every angel deserves their halo.

Immersed in a world where angels walk among us, besieged with the same sins we struggle with . . . and the same desires. Deep down, everyone just wants to be loved and accepted.

There’s Ava, the worst angel ever. She can’t even perform a miracle.

Simon struggles to regain his place in the heavens after breaking numerous angelic rules.

And Aron, the Angel of Death, falls in love with a human.

But angels aren’t all that walk among us. Werewolves, demons, fae, and vampires lurk over your shoulders and around every corner.

Will the angels save you? Or are they too busy trying to save themselves?

Total of over 900 pages of reading in a single box set!

Dive into the complete collection of the novels in the Angels of Sojourn Series.

Blood & Holy Water
Ava’s an angel. Fin’s a vampire. When a murder his close to home, they form a forbidden alliance to save those they love. Somewhere while uncovering clues and sneaking a peek at dead bodies, they form an unwavering bond neither of them expected. The only problem? Their relationship threatens Ava’s place in the heavens and put’s Fin’s immortal existence in jeopardy.

Fur & Feathers
If raising a son who sprouts fur and claws during every full moon wasn’t enough to keep Katrina busy, try dealing with a needy angel who just fell from the heavens. Oh, on top of that, a dead body shows up on her property, and it looks like her eight-year-old son may have been involved.

Souls & Shadows
The Angel of Death is obsessed with her. Can you say stalker? But when the mother of one of Lily’s students is murdered, his help’s just what she needs. Plus, he’s kinda hot.

The Angels of Sojourn series is a fast-paced, gritty urban fantasy that contains romance on the sweet side. If you’re looking for steamy details, you won’t find them in this series.