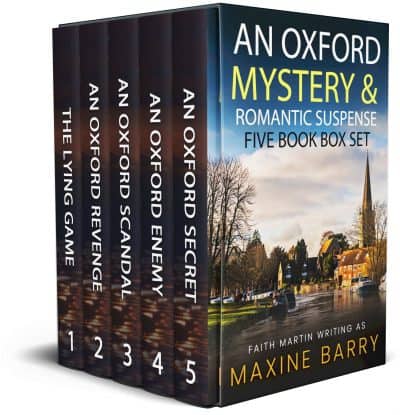 Get five utterly gripping page-turners from Faith Martin (writing as Maxine Barry), bestselling author of the beloved Hillary Greene series, for a bargain price. Over 3,000 reviews on the individual books!

Escape with an irresistible new box set from Faith Martin (writing as Maxine Barry), bestselling author of the beloved Hillary Greene series. Simmering with suspense, intrigue, and heart-stopping romance, these five books will keep you turning the pages all summer long! Don’t miss out on this series of utterly addictive page-turners in one great-value box set!

The Lying Game
Oriana spent years in prison for a murder she didn’t commit. Now she wants to clear her name. She returns home, but no one wants her back. Least of all Lowell, the love of her life and the victim’s brother. Can Oriana win him back before the true killer strikes again?

An Oxford Revenge
Davina wants revenge. She blames Dr Gareth Lacey for her brother’s suicide, and she has a plan to make him pay. But it never included falling in love with her sworn enemy. Can he really be as guilty as she thinks?

An Oxford Scandal
Glamorous Laurel Van Gilder comes to town to present an award. The prize: a priceless Van Gilder heirloom. The winner: an infuriating professor who Laurel can’t stand. But when the prize goes missing, it’s him she turns to for help. Can they get it back in time to save them both from scandal?

An Oxford Enemy
When Keira marries her dear friend Lucas—a man fifty years her senior—his family are up in arms. But the marriage makes sense to Keira. Until Lucas’s step-son turns up. He and Keira can’t deny the powerful attraction between then. But in a family full of secrets, love can spell danger.

An Oxford Secret
When Flame’s father dies, she is reunited with with her long-lost twin. But he is anything but happy to see her. He thinks she’s a gold-digger, come to claim her cut of the family fortune. What is he not telling her about their father’s death? And how far will he go to keep his most precious secret?