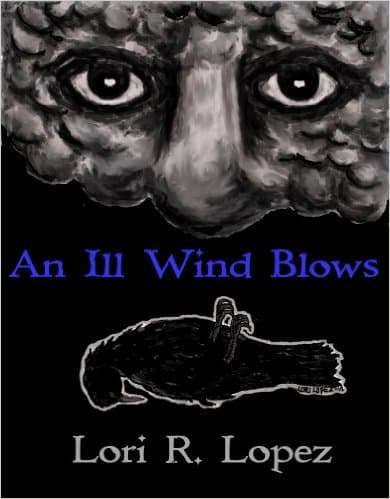 One night someone perfectly plain is swallowed up by an evil storm that will lead her through a series of crazed adventures in search of a cursed object.

The unique adventure AN ILL WIND BLOWS depicts one night when an ordinary person lacking confidence must battle a wicked wind. The stakes are high as she, along with friends and foes, travels through a magical storm world that culminates in a ghost town populated by more than just spirits. This is a story that keeps delivering action and fun throughout. It is more than a single tale in a single genre. The book blends Humor, Horror, and Fantasy.

From the time the characters are sucked into the storm, the reader is transported with them on a strange chaotic trek. Meezly finds herself tangled in a web of chills and intrigue as she attempts to search for a mysterious gem called The Cursed Eye, which her missing father entrusted her to safeguard. The stone was used by a Sumerian king to transform an evil jinn from a wind spirit to a vainglorious force.

This fable is as imaginative and unconventional in style as it is in plot. A vulnerable individual struggling to overcome debilitating losses, Meezly stumbles through a gauntlet of thirteen macabre tribulations down a forest highway. Twists and madness abound during her eclectic hectic journey of the soul. It is a lighthearted yet touching trek that readers will want to take again.

Facing fears and the power of friendship are important themes. Chapters alternate from First Person to multiple Third Person perspectives. The supporting characters, a mixed and quirky bunch of allies or villains, each have their own insightful stories.

An illustrated print edition features odd and vivid artwork by the author.