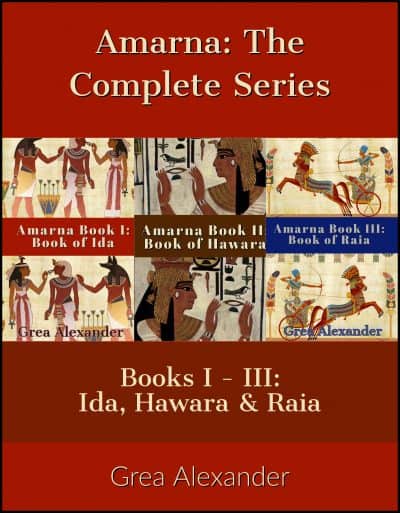 This compilation edition includes all three books in the Amarna Series. Book of Ida (Amarna 1), Book of Hawara (Amarna 2), Book of Raia (Amarna 3)

The last living male descendant of the Amarna line, Pharaoh Tutankhamun, has died suddenly under mysterious circumstances. His wife, Queen Ankhesenamen, is left without a male heir. The ambitious vipers Ay and Horemheb are nipping at her heels in their bid to seize power. Queen Ankhe has but one hope to maintain her hold on the throne—an alliance with the Hittites.

King Mursili II’s only hope to restore his own Hittite Kingdom to greatness is to restore the Amarna line to power in Egypt, to atone for the sins of his father. Yet, with those closest to him being sacrificed in the process and the tide continuing to rise against them, how far is King Mursili prepared to go to see the prophecy fulfilled?

Hell hath no fury like a spider caught in its own web. It’s all or nothing. Either the prophecy is fulfilled and both Egypt & Hatti find salvation or Mursili and his allies fail—plunging both kingdoms into indescribable darkness. Behold, even in the terrible deafening silence of their abandonment, the gods had never been more clear. The time has come for judgment.