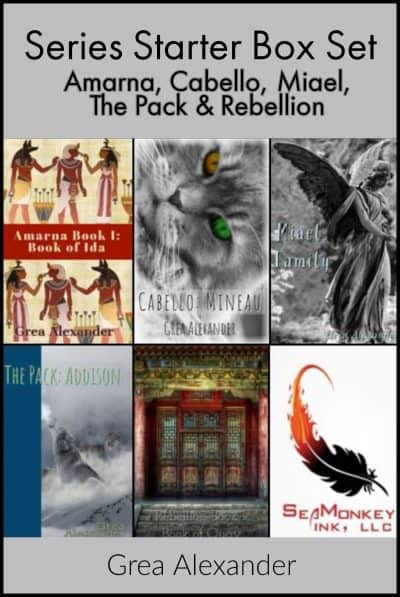 This collection features the first books of the following series by Grea Alexander: Amarna, Cabello, Miael, The Pack, and Rebellion

This collection features the first books of the following series by Grea Alexander:

Did the Amarna line really end with King Tut’s Death?

After King Tutankhamen’s death, his queen has but one hope to maintain her hold on the throne—an alliance with the Hittites. With Ay and Horemheb watching her every move, there is only one person she can trust to save her and her line: a girl, a slave—Ida.

Nightmares are the stuff that answered prayers are made of.

When everyone involved in the cover up of Mineau December’s abuse and brutal assault begin to die under mysterious circumstances, Mineau believes her prayers are finally being answered. Answered prayers, however, quickly turn into a nightmare when Mineau finds that her savior is more dangerous than anyone she has ever known, than anything she could possibly dare imagine.

Curiosity may well have killed the cat, but it damned for eternity the phoenix and the seraph.

Addison Savaughn’s only sin was being born at the wrong time, to the wrong bloodline.

Instead of friends, Addison had Mama and the Hunters’ Guild. Still, there was just one problem. Addison didn’t believe a word of it.