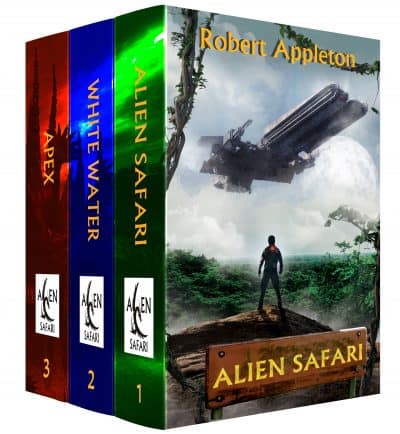 To solve a series of mysteries with galaxy-shaking implications, Detective Ferrix Vaughn joins forces with a female wildlife safari ranger on Hesperidia, an alien world of savage beauty. Apex predators, deadly outlaws, and hidden perils beyond imagination await. Over 140 positive reviews on the individual books!

Alien Safari
To solve a mystery with galaxy-shaking implications, Detective Ferrix Vaughn joins a wildlife safari on Hesperidia, an alien world of savage beauty. It’s supposed to be a protected planet, but evidence of a deadly breach poses troubling questions. What links a crashed ship, five murders, and precious stolen biotech? Jan, the ranger who accompanies Vaughn, warns of something even deadlier: an apex predator that roams the remote region they’re about to enter. This is its killing season.

White Water
Discover the wet and wild side of alien nature as safari ranger Jan and her detective partner, Vaughn, re-team to find a missing girl and solve one of the galaxy’s oldest secrets. A leisurely cruise becomes a race against time when passengers steal Jan’s equipment for a dive into uncharted depths, triggering a tragic series of events.

Vaughn has to leave a crucial bombing investigation in another system to come to her aid. But he soon realizes the stakes of the illegal salvage operation underway on Hesperidia are far more explosive . . . and far-reaching . . . than anything he could have imagined.

Apex
In the wake of a devastating meteorite impact, Jan finds herself in competition with a formidable new male colleague for the role of First Ranger. Their assignment leads them to the frozen north, where the discovery of a deadly new species imperils not just the safari tours, but potentially all life on the planet.

Meanwhile, Detective Vaughn must face his tragic past head on when he learns that his niece has been targeted for assassination. To keep her safe, he brings her to an island haven on Hesperidia. But the timing of his return couldn’t be worse. A perfect storm of incident, treachery and planet-shaking events endangers the very future of human existence on this miraculous alien world.