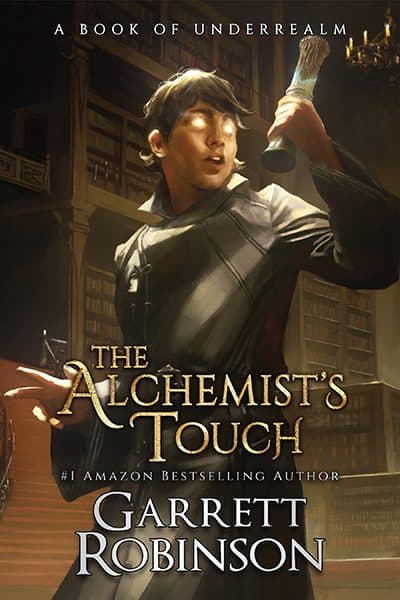 The only thing tougher than Ebon’s magical school is his family’s dark past. A page-turning tale of crime and wizarding wonder.

At the age of six, Ebon Drayden discovered he was an alchemist—a wizard who can transform matter with a simple touch. But his father forbade him to use his magic, and kept him from attending the Academy where he could learn to use it.

Just before his seventeenth birthday, Ebon’s aunt intervenes on his behalf and enrolls him in the Academy. Now at last he has the chance to use the magic he has so desperately yearned to control—yet the learning comes hard, for he has wasted more than half his life squandering his gift.

To make matters worse, the darkness of his family name plagues him. The other students are terrified. Teachers regard him with suspicion. And before long, his family begins to draw him into their schemes that span all the nine kingdoms of Underrealm.

A dark plot is brewing upon the High King’s Seat, and slowly Ebon finds himself being drawn into it. If he is to learn to become an alchemist—indeed, if he is to survive at all—he must cast off his family’s black legacy, and become the wizard he was always meant to be.

The Academy Journals is a new series set in the world of Underrealm, and a companion series to the Nightblade Epic, hailed as one of the best new sword and sorcery series in years. Your journey begins here.