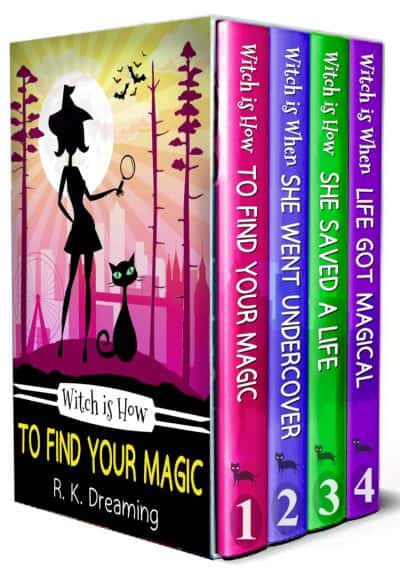 Rookie detective Cecily Plum doesn’t know she’s a witch . . . yet! But when a body turns up and her best friend goes missing, she better learn to use her magic fast. Funny, fresh, and full of endearing characters. Fans of paranormal cozies will love this fab series!

Cozy up with this collection of the first FOUR books in the A Witch Detective Cozy Mystery series:

Witch Is How to Find Your Magic
Cecily Plum is excited about starting a new life and a new job and leaving all her silly childhood witchy stuff behind her. After all, magic isn’t real. Surely she was imagining it? But when her best friend goes missing following a murder, magic might be the only thing that will save her.

Witch Is when She Went Undercover
When a rock star is murdered at the society wedding of the season, Cece is excited about going undercover to find the killer. But when two of her own friends become caught up in the wedding disaster, can Cece find a way to give everyone the happy endings they deserve?

Witch Is How She Saved a Life
Cece’s magical world expands into the mind-boggling when her best friend Lola asks her to help save the life of a supernatural murderer who Lola claims is innocent.

Witch Is when Life Got Magical
Cece’s idyllic weekend getaway to a fabulous mansion in magical Brimstone Bay goes awry when a fellow house-guest is murdered. The problem is Cece’s beloved grandmother is the only witness to the crime but didn’t see enough to identify the culprit. Now they’re trapped in the house with a clever killer.

Get the collection now and join Cecily on the first rollicking, magical, murder-mystery adventures of her new life as a witch!