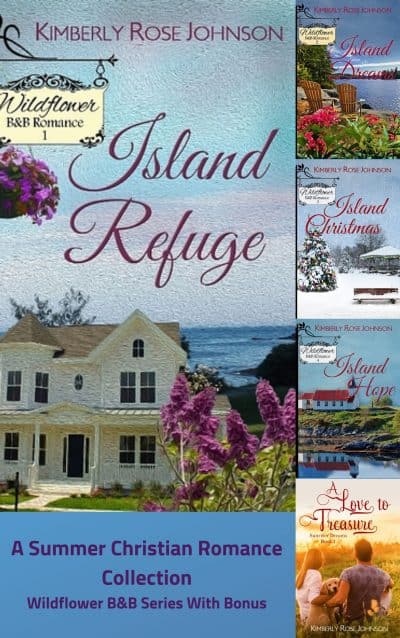 A Summer Christian Romance Collection: Wildflower B&B with a Bonus

Relax by the pool with an iced beverage and binge-read five inspirational romances filled with memorable characters, a touch of mystery, and heartwarming stories that you will carry with you long after the books are finished.

Island Refuge
A heartbroken chef and a burned-out doctor seek solace and a new beginning on a tiny Puget Sound island at the Wildflower B & B, and discover the bed and breakfast is a place of healing, adventure, and romance. Book one in the series.

Island Dreams
A land developer with something to prove comes to Wildflower Island to develop her family’s land. She soon finds herself at odds with adjoining property owner. If only she wasn’t attracted to him. Book two in the series.

Island Christmas
A sous Chef returns to Wildflower Island looking for a fresh start for herself and her young son but discovers that life has a lot of bumps in the road even on idyllic Wildflower Island.

A self-proclaimed workaholic comes to Wildflower Island hoping to take life at a slower pace. When a new guest at the Wildflower B&B catches his eye, he is drawn to her. But how will a woman and her young son fit into his future—a future that’s uncertain at best? And most of all, how can he reconcile her lack of faith in God with his strong religious beliefs. Book three in the series.

Island Hope
A metal sculptor gave up on art when her creativity was zapped by another person’s actions, she takes a job on Wildflower Island. She never imagines that a job at the Wildflower Resort will turn everything in her life upside down.

A lonely widower throws all his energy into raising his teenage daughter, but when he is promoted to manager of the Wildflower Resort, things at home don’t go as smoothly as planned. Worried about his relationship with his daughter, he seeks advice from a feisty-but-sweet newcomer. Will she help smooth his path or will things only get more complicated? Book four in the series.

A Love to Treasure
School teacher Nicole Davis is on summer break, but this vacation is unlike any other. Her beloved Grandmother’s final wish has landed Nicole smack in the middle of her favorite destination—Sunriver, Oregon, following Gram’s clues on a mysterious scavenger hunt. Unexpectedly, Nicole finds more than just a fellow sleuth in a handsome police officer, Mark Stone. But Mark must return to his job in Portland at summer’s end, and Nicole must guard her heart.

Mark is hoping for a quiet summer in Sunriver as he contemplates his future in law enforcement, but a string of burglaries draws him from his self-imposed break from detective work and thrusts him into the middle of the investigation. To complicate matters, Nicole is in jeopardy, and he knows his growing feelings for her could cloud his judgment. Will their differing career goals be the end of their summer romance—or just the beginning of forever after? Book one in the series.