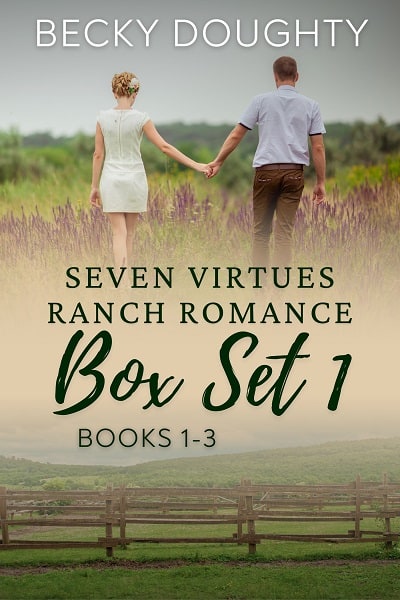 Welcome to Seven Virtues Ranch! Meet Faith, Hope, and Charity in the first three full-length novels in this feel-good, sweet romance series set in small-town ranch and farm country. Over 240 reviews on the individual books!

Gotta Have Faith
Can a small-town cowgirl and a big-time city boy risk a second chance at happily ever after? Faith has overcome major obstacles to save her family and bring Seven Virtues Ranch back from the brink of disaster. So when her high school sweetheart, Cord Overman, shows up hoping to win back her heart—oh, and he’s bought the ranch next door—her carefully ordered world she’s worked so hard to build threatens to implode.

Where There Is Hope
Doc Hope is the woman to call when your pet is ailing, your cow stops eating, or your horse goes lame. Because she understands animals a whole lot better than she does people, that’s for sure, and she’s sworn off men altogether. But local butcher Levi Valiente is tired of hiding his great big heart behind the shield of his butcher’s leather apron, and he’d like to believe that where there’s Doc Hope, there’s a good chance of happily ever after, too.

Oh Sweet Charity
Charity has moved back home to Seven Virtues Ranch where she pours her grief into the meals she caters to her growing list of clients. When the ghost of her husband appears in the haunted eyes of a wounded soldier, she wants no part in bringing either of them back to life. Frank Banner has come home to Plumwood Hollow to recover from a failed reconnaissance mission in the Middle East. They managed to save his legs, but Frank seems to have lost his footing. The girl next door may be the only one who really understands what he’s going through.

Pick up the Seven Virtues Ranch Romance Box Set 1: Books 1-3 (Gotta Have Faith, Where There Is Hope, and Oh, Sweet Charity) and start the series today!