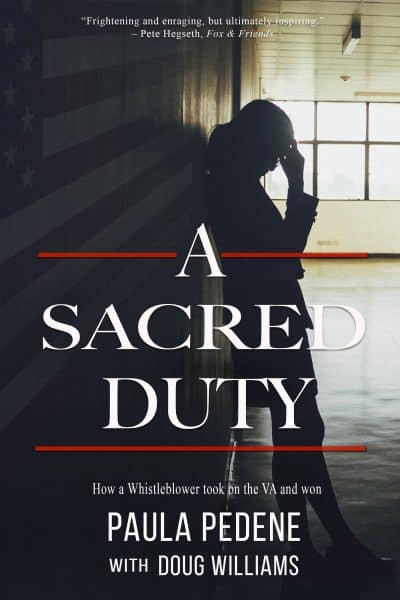 A Sacred Duty: How a Whistleblower took on the VA and won

Pedene’s memoir is a classic David vs. Goliath tale—one woman who loves her country and the veterans she serves against the government bureaucrats determined to silence her at any cost.

A SACRED DUTY is the true story of Paula Pedene, a visually impaired, decorated Navy veteran who was instrumental in exposing the corrupt leadership at the Veterans Administration hospital in Phoenix, Arizona. Hoping for a return to integrity, instead the new administration retaliated by stripping her of her position in public affairs and consigning her to the basement to work as a librarian.

The reprisal included a “30-day investigation” into bogus misconduct charges that stretched into more than eighteen months. Psychologically crippled by the attacks—and battling financial ruin, ruthless superiors, a skeptical media, and her two sons’ emotional crises—Pedene fought back, refusing to surrender to a system that was stacked against her.

Working alongside a bulldog congressional investigator, an ornery VA doctor, and a husband who believed in her, Pedene became a central figure in exposing a conspiracy that rocked the nation, killed hundreds of veterans, provoked nationwide outrage, and ultimately brought down the Secretary of Veterans Affairs.

Pedene’s memoir is a classic David vs. Goliath tale—one woman who loves her country and the veterans she serves against the government bureaucrats determined to silence her at any cost.