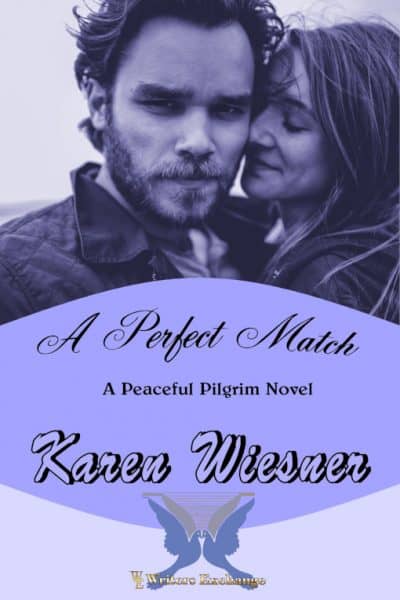 Lena Young has worked 2 jobs since she was in high school. She's 30 and raises the daughter of her abusive older brother. When her friend convinced her to sign up for Perfect Match, she couldn't get herself to go through it—until Dante responds to her profile.

Peaceful Pilgrim is an unofficial series in no particular order set in Karen Wiesner's fictional town of Peaceful, Wisconsin. Peaceful is a modern-day small community with old-fashioned values and friendly people you'll want to get to know and visit often. Both the Family and Friendship Heirlooms series' are set in Peaceful.

At nearly 40, Dante Robinson has never been in a relationship that wasn't more than a one-night stand. His nephew, a college student, living in the upstairs apartment of his garage reveals that, on a lark, he and his friend started an online dating company, Perfect Match. Dante insists he shut it down . . . until the kid offers to hook him up with a "naughty librarian."

Lena Young has worked two jobs since she was in high school. She's 30 and raises the daughter of her abusive older brother, a truck driver, as if she's her own. When her friend convinced her to sign up for Perfect Match, she couldn't get herself to go through it . . . until Dante responds to her profile.

Developing a major crush on her brother's best friend hadn't been difficult when Lena was a sheltered girl, but Dante hasn't been back to their house in 16 years. After she agrees to meet him without telling him who she is, she discovers he only invited her over to his house to get laid. She's mortified but, when an equally humiliated Dante comes to the truck stop diner she works on the weekends and apologizes, begging her to forgive him, she can't turn him away. Wanting to tell him to hit the road, she instead finds herself believing him, championing his determination to become a better man . . . convinced that, with him, she could have one thing in her life that brings her the kind of joy she's always dreamed of but has never considered possible.