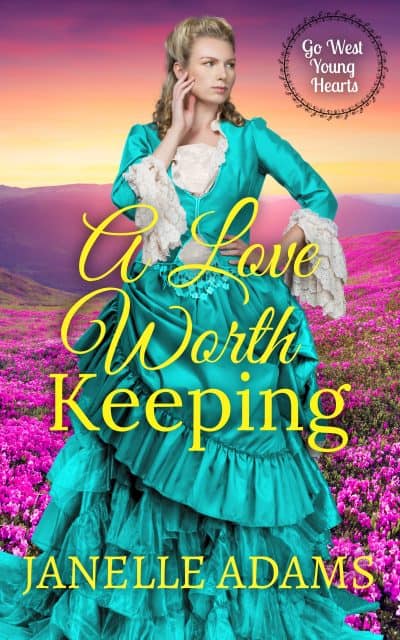 Betty and Jackson couldn’t be more opposite, but sparks fly between them. When a new man arrives in town with his sights set on Betty, partial truths threaten their courtship. Will Betty choose the wrong man and leave her and Jackson with broken hearts?

With long lashes that dance on her face and an uncanny ability to sashay her hips, Betty Cobble is the desire of nearly every man in town. She revels the attention, and the last thing she wants is to give it up by marrying.

Jackson Rider arrived in town a few months earlier, bringing with him a secret he’s ashamed of. He’s made good friends and has a decent job, but what Jackson really wants is to find a nice woman to marry. But a gold rush town predominately made up of men does not leave Jackson with many options—and flirtatious Betty is definitely not one of them.

Unplanned circumstances force Betty and Jackson to spend time together. As the two get to know each other, they are both surprised to find that their previous presumptions of the other were wrong. Betty wonders if settling down wouldn’t be so bad after all. And when Betty learns Jackson’s secret and protects him from having it exposed, Jackson starts to believe that Betty might be the one for him.

But then a new man arrives with his sights set on Betty, rumors begin to fly, and partial truths threaten Betty’s and Jackson’s courtship. It’s hard to douse the flames of true love, though, and Jackson soon realizes he must fight for Betty‘s love. Will Jackson be able to prove to Betty that he’s worthy of her? Or will Betty choose the wrong man and leave them both with broken hearts?

Fall in love with the residents of Coyote Pass, a fictional town set during the 1850s California gold rush. Each book in the Go West Young Hearts series can be read as a stand-alone. If you love clean and wholesome romance, happily ever afters, and characters you root for, then these books are sure to delight!