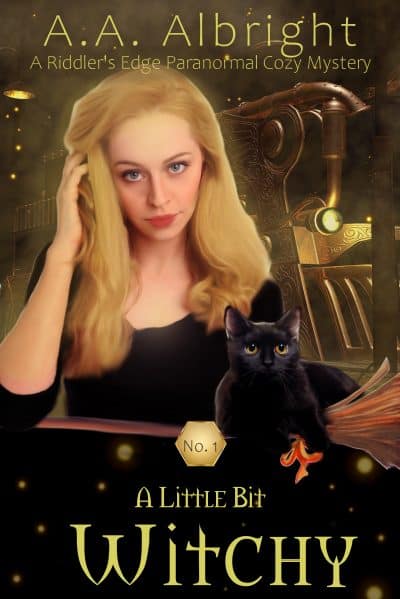 Join reporter Aisling Smith as she moves to the small Irish town of Riddler’s Edge—a town filled with magic, mystery, and too many murders. With the help of a handsome but grumpy detective and a host of supernatural friends, she discovers—is she a little bit witchy?

There has most definitely not been a murder on the Riddler’s Express.

Aisling Smith is about to try out for a new job—a job writing for a paper she’s never heard of. But seeing as she’s currently writing classified ads and obituaries, it would be foolish not to give it a shot.

Riddler’s Edge might be a small town, but it’s definitely not boring. The train hasn’t even pulled into the station, and already a woman has been murdered.

According to the grumpy but gorgeous Detective Quinn, the passenger’s death wasn’t a murder at all. He insists that Bathsheba Brookes died of a nut allergy. Aisling doesn’t believe it for a minute. She intends to discover the real story—a difficult challenge, considering the town’s inhabitants seem to be keeping some very big secrets.

Riddler’s Edge is a town where people wear sunglasses after dark, and creatures howl in the woods. It’s also a town where, despite the strange occurrences, Aisling feels right at home.

But even if she gets to the bottom of Bathsheba’s death, Aisling might not get to be the Daily Riddler’s newest reporter. There’s one final, mysterious test that she must pass—a test carried out by the newspaper’s owner. And Aisling suspects he might be looking for more than just a journalist . . .