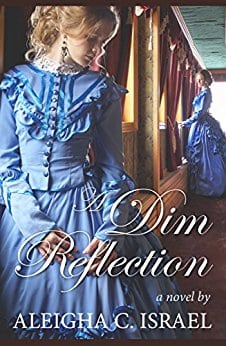 A Dim Reflection (A Light for Christ trilogy Book 2)

Two lives shattered because of one choice. But will it be enough to keep two siblings from finding each other again?

William Caverly can’t seem to understand the unsettling feeling that has been nagging him for far too long. Memories of a baby sister are forever haunting his waking hours, and as he sleeps at night, he is repeatedly awakened by nightmares, confusing ones that he’d rather forget. He was told that his baby sister died. He saw her little body laid to rest beside their mother. But that doesn’t explain the dim remembrance he has of an event that happened not too long after that.

His days are busy as he leads a new life in the quiet town of Chasahburough, trying to forget the horrors of his past. A surprise run in with the former scullery maid, Anna Haddington, reminds him that God works out everything for a greater purpose, and He never makes mistakes.

​Charlotte Porter’s days are full and busy as she diligently teaches her young art students at her mother’s boarding school, and tries to come to terms with her father’s mysterious death. Painting has been her passion and dream ever since she could hold a brush, but lately she has begun to question her mission and calling in life. What is her real purpose? And why does she know so little about her father, who supposedly died before she was born?

William thinks he’s discovered the hidden link that has kept him from his sister for over fifteen years. But then she’s kidnapped, leaving William no choice except to find her and get her back. Once and for all.