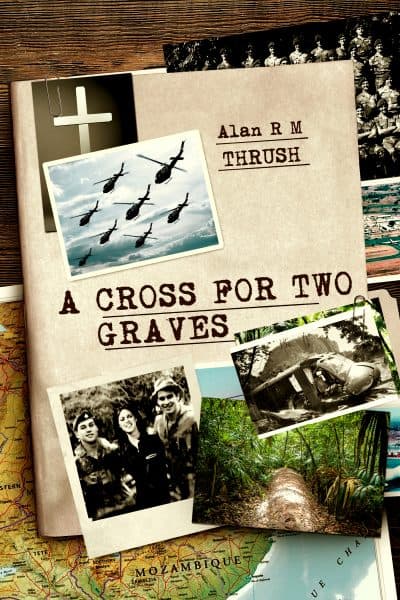 A Cross for Two Graves

A powerfully written story of unfailing love and the strength of the human spirit. The subtext explores the impact of PTSD. The result is a compelling and moving tapestry of love, war, enduring friendship, and the eternal debts of honor forged in battle. Unputdownable.

When a newly published work of fact hints at a cover-up of events surrounding the deaths of soldiers and crew aboard a doomed military helicopter, veterans and others connected to that long-ago day are forced to make difficult choices. For some of them, the decisions they take will be life-changing.

Peter Willis, a businessman tortured by nightmares of a war that ended more than thirty years before, must confront his past and choose between continuing a life in denial, or joining a quest into the African bush to find the remains of his brothers-in-arms—a search that he knows will force him to remember precisely that which he wants to forget.

Joe Webber, a disabled London derelict forgotten by many whom he fought to defend, must now choose between the alleys and dealers that help him bury all recollection of battle, and revealing what he knows.

Clare Baker, the woman who once loved both men, must face her own demons as her part in the search for war wreckage forces intense self-examination. Should she continue to seek atonement for the hurt she has caused, or turn her back and walk away forever?

And the Colonel—Alistair Sutherland—former commander of Willis and Webber, must watch over all even as he co-ordinates the quest. He must prevent any man from spiraling into the abyss of self-destruction.

A Cross for Two Graves is Alan Thrush’s gripping fictional account of one quest to find a crashed air force aircraft and the remains of those flying into battle aboard it. Yet in the telling of the tale, he delivers an absorbing and tantalizing subtext: the complexities of post-traumatic stress and its impact on the individual. The result is a moving story of the long-lasting effects of modern warfare on soldiers—their eternal burden woven into a tapestry of love and war, lifelong friendships, and debts of honor forged in battle.

As the narrative ratchets back and forth in time between the glass-and-steel skylines of present-day London and Johannesburg, and the harsh, unforgiving bush of the central African battleground, the unearthing of buried memories begins to claw at mental scar tissue carefully cultivated to mask personal pain, while the search itself threatens to reveal a dangerous truth. For aboard that helicopter on the day of its destruction was a captured guerrilla—a prisoner taken in combat and a man who survived it to become a leading figure on the playing fields of today’s politics. His ties to his former enemy must be protected . . . at all costs.