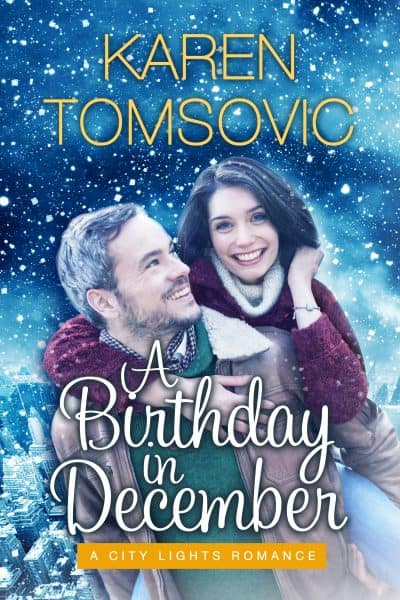 Geoffrey Monroe’s portrayal of Scrooge isn’t wowing anyone on Broadway this Christmas. But when a passionate young mother moves in across the street, he risks finding his heart for real.

Amanda Monroe’s Christmas list is short and sweet: deliver birthday cakes to three loved ones celebrating their special day during the holiday rush. She wants to spread togetherness among her family of actors while they’re in New York.

Oh, and a third wife for her twice-divorced father would be nice, too.

For Geoffrey Monroe, January can’t come too soon. That’s when he’ll be free of his role as Scrooge and able to resume his globe-trotting lifestyle. His portrayal of the stingy grump isn’t winning over anyone on Broadway. Then there’s his daughter’s New Year’s resolution to marry him off. Geoffrey knows the truth, even if she doesn’t: Some people are better off single.

But then Toni Piccolo, a young widow with an impossible daughter of her own, turns up in the townhouse across the street.

When Geoffrey gets an idea to teach their interfering children a lesson, he finds himself giving his most fulfilling performance yet—as a man who’s fallen for the passionate songstress and is ready to settle down. But can he convince the women—and himself—that it’s only an act?

Treat yourself to a holiday sugar rush with this sweet romantic comedy. Book 2 in the City Lights New York series.