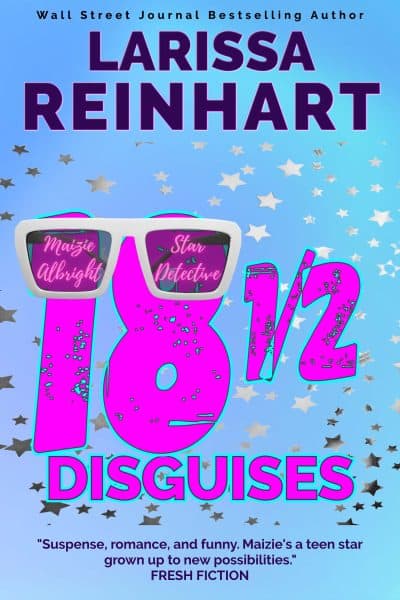 “A mixture of adventure, mystery, and romcom. So like Hollywood, you’ll never figure out what is real and what is make-believe until you reach the end.” —Laura’s Interests

#DisguisedDetectiving Maizie Albright might have once played a (teenage) private investigator on TV, but she’s now living the part. Her (mother’s) name is on her business cards. Her (boss’s) appointment book is brimming with new clients. And her bank account has grown large enough to finally trade in her dirt bike for an actual new (pre-owned) vehicle.

And then there’s Wyatt Nash. Love of her life. Future father of her . . .

And then there’s Wyatt Nash. Future partner in her business. Because Nash is now working for her father. Not working for the private investigation business that’s waiting for Nash to get out of the red so they can get on with…

Just what, Maizie isn’t so sure.

But she is sure about one thing. She’s ready to take on her own cases. To prove to (herself) her friends and family, she’s more than just a (washed-up actress) assistant private eye. And when Maizie finds her costume designer friend killed during a masquerade gala, it’s the opportunity Maizie hoped she’d never get. An investigation into an old friend’s murder. One that’s put her new friend, Rhonda, in jeopardy.

While the police begin their inquiries, Maizie starts her own case. She’s needling Black Pine’s wealthy do-gooders, threading through lies, stitching together clues, and ripping out false leads. Her investigation may cost Maizie her job, her relationships, and her life. But by unspooling the truth, Maizie’s darned if they stop her from catching a killer who’s sew evil, it’s shear madness.