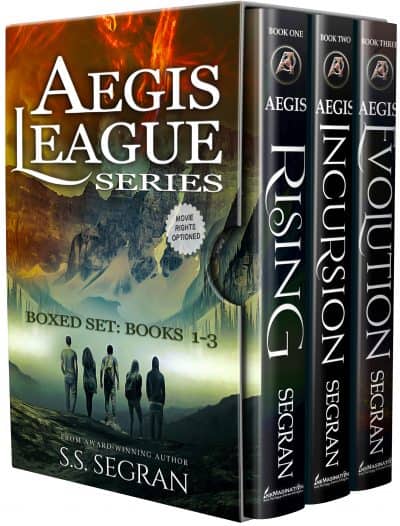 Are we capable of higher evolution, or are we destined for annihilation? Two powerful forces battle for the fate of humanity. Five friends hold the key to salvation. “Astonishingly imaginative and thoughtful.” —Samuel F. Pickering, inspiration for Dead Poets Society

Aegis Rising
Five friends must rise to meet the call of an ancient civilization in the first installment of this Amazon bestselling series.

Jag, Tegan, Aari, Mariah and Kody are cast into an adventure like no other when their small plane crashes in the remote forests of northern Canada. Rescued by the descendants of an ancient civilization who have lived in secret for over two millennia, they realize it may have been more than a mere accident that brought them to the hidden valley.

The teenagers, grateful for the hospitality but eager to return home, are stopped cold when their saviors share a terrifying proclamation: a darkness is descending on humanity’s horizon, and the five of them have been chosen to confront the gathering force bent on remaking the world in its image.

As they come to terms with their new roles and learn to unlock powerful abilities, their first trials loom before them sooner than expected. But they must be careful—adversaries are watching from the shadows, and will do anything to make sure the friends burn before they can take flight as the Chosen Ones.

A mysterious plague tears across the planet, obliterating vital crops in its wake. Panic and riots break out, pitting citizens against each other. Famine and rebellion push desperate nations to the brink of war.

With the memories of their fateful summer suspiciously erased, Jag, Tegan, Aari, Mariah and Kody must rediscover themselves and the powerful secret they possess to rise against the forces of darkness eclipsing the world.

Hunted at every turn by clandestine operatives dead set on stopping them, can the group outmaneuver their pursuers and prevent humanity from sliding deeper into ruin? Or will the enemy continue to march forward, reforging life as we know it?

Aegis Evolution
A terrifying pandemic decimates society. A two-thousand year old cure buried away in secrecy. Five Chosen Ones on a quest across continents prepare to pay the ultimate price.

Two strains of a devastating pathogen infect population centers around the globe, each bringing death in its own horrific way. From mega-cities to remote villages, the descent into chaos is swift as the disease spreads like raging wildfire.

Having returned to Dema-Ki to complete their training, Jag, Tegan, Aari, Mariah and Kody are tasked with their most challenging mission yet by the Council of Elders. When Jag is injured saving a life, Tegan is forced to assume leadership of the group—but things take a turn for the worse when one of their own becomes infected.

The friends throw caution to the wind and risk everything in their quest for a cure . . . one which, for reasons unknown, has remained concealed for nearly two thousand years.

Can the League discover the remedy before a relentless enemy locates and destroys it, sealing the fate of millions in its quest to remake the world?