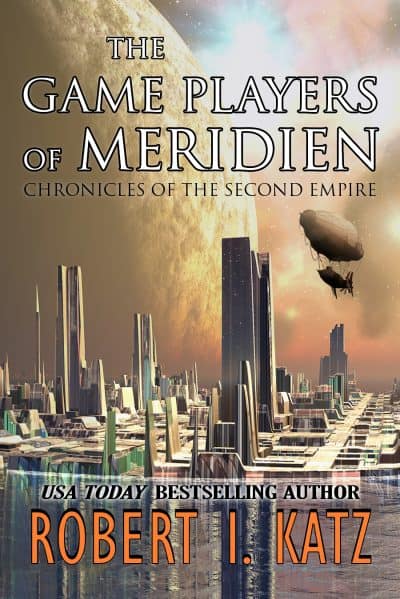 by: Robert I. Katz

Douglas Oliver loves to play games, and he’s not afraid of a challenge, but when a challenge arrives from an unknown agent, the Game is suddenly no longer just a game but an all-out war for survival—with Douglas Oliver at its center.

Douglas Oliver’s ancestors were genetically engineered to be perfect soldiers for the Imperial armies. The Empire has been gone for 3000 years, but its legacy remains. Strong, fast, smart and aggressive, the people of Illyria relish competition of every sort.

In Meridien, the richest nation on Illyria, the greatest game of all is the Game of Life, and in the Game of Life, keeping score is simple. Status, riches. and power mean that you’re winning, but the rulers of Meridien know that too much competition can destroy everything. The Guilds and the Guild Council ensure that the rules of the Game are followed.

Douglas Oliver is nowhere near the most powerful player in the Game, but he’s young and he’s successful. He has time. He understands the rules and he isn’t afraid of being challenged, until a challenge arrives from an unknown agent and suddenly, the Game is no longer just a game. It’s an all-out war with Douglas Oliver at its center, a war that threatens everything and everyone that he loves.