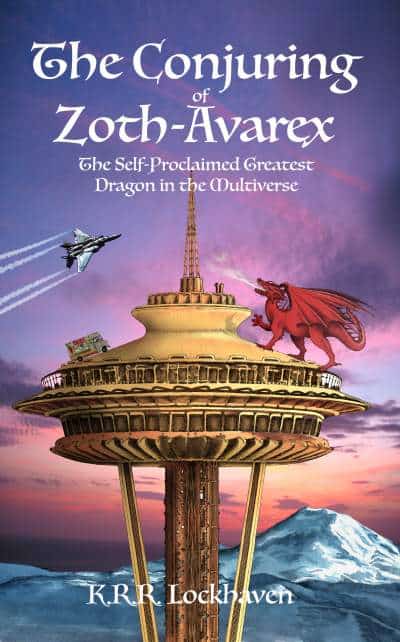 The Conjuring of Zoth-Avarex: The Self-Proclaimed Greatest Dragon in the Multiverse

Earning a starred review from Kirkus, The Conjuring of Zoth-Avarex is a fun, fast-paced story about a secret magical site that stupidly conjures a dragon to Earth.

Kept hidden by the United States government for decades, the Site is a place where magic is real. But that doesn’t mean that everything happening there is sparkly. Soul-sucking policies and layers of stifling bureaucracy threaten to take all the fun out of magic.

Harris, a newbie Conjurer, starts his first day of work at the Site bursting with excitement: he’s been brought on for an extremely big project happening the very next day. In a triumph over its habitual inefficiency, the Site manages to carry out its plan and conjure an actual dragon to be used by the military.

The dragon (Zoth-Avarex, the self-proclaimed greatest dragon in the multiverse) immediately eats the person next to him, snatches a “princess” from the ranks of the Conjuring Department, and flies away to the Space Needle. There he manipulates the media, outwits the Site’s bumbling management, demands sixty-three billion dollars’ worth of treasure (because Smaug was said to have had sixty-two billion in his hoard), threatens to destroy the city—and installs a couple of food trucks.

While this book skewers the same fantasy genre it gleefully inhabits, it also pokes fun at corporate culture, today’s obsession with wealth and celebrity, and our denial that life is anything more than meets the eye. Hapless Harris, believing in magic all along, learns to apply what he’s picked up between the pages of fantasy literature.