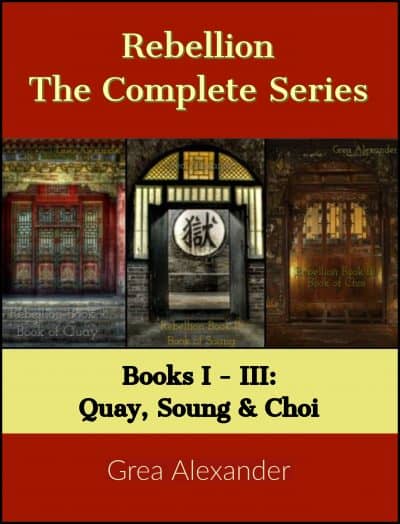 This series includes all 3 books in the Rebellion Series: Quay, Soung & Choi.

REBELLION BOOK I: BOOK OF QUAY

As the Han rebellion against the Emperor intensifies, the Princess Soung may just find herself a casualty in the battle between her father and the man she loves—a battle between the past and the present, between the truth and lies, between love and revenge.

What if the person you could trust the least was yourself?

As old lies unravel, new deceptions are revealed and old insecurities resurface, can a love without trust survive?

For the past two decades, Ni Soung has been living a lie—a lie of her own creation. A lie perpetuated by everyone around her, even her own husband and father. A lie her enemies have used to twist and destroy everything she once believed. Now, as the lies are stripped away and her memory returns, will Ni Soung uncover the truth in time to change the future or will she be destroyed by it instead.