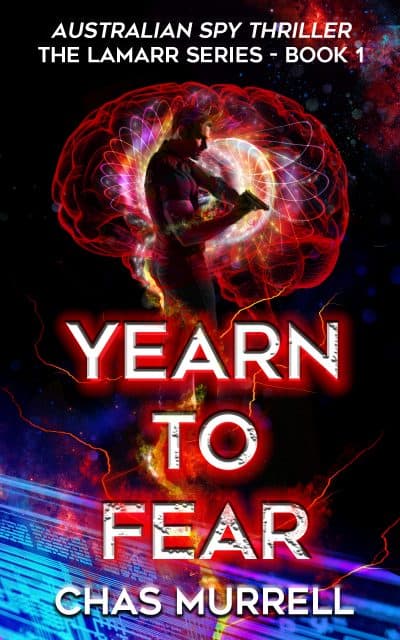 Yearn to Fear (The Lamarr Book 1)

An invention that can cure humanity . . . or control it. Sydney scientist Marcus Hall is developing a 5G Wi-Fi receiver for CSIRO. On a caffeine boosted whim, he discovers by chance a therapeutic breakthrough in neuroscience. Or so he thinks . . .

(1) Moderate
(1) Adult
Log in to submit or change your own rating.
Click or tap each bar for more details

But more adept at controlling it . . .

Sydney scientist, Marcus Hall, is developing a radical 5G Wi-Fi receiver for CSIRO. With access to secretive Lamarr computer chips, this technology promises billions to repair Australia’s ravaged economy. On a caffeine boosted whim, he inadvertently discovers a therapeutic breakthrough in neuroscience. Or so he thinks . . .

His seemingly trustworthy lab partner, Henry, is an unlikely Australian spy. His official duty is keeping tabs on the project and their Lamarr chips. But the whole project is now classified top-secret.

Marcus remains blissfully unaware of the many secrets surrounding him, until he witnesses the graphic murder of a colleague. Could this event reveal Henry as a master deceiver and ruthless double agent? Will the scientific discovery be fatal for Marcus, those he loves, and the one he yearns for? Marcus faces a soul tearing dilemma: is the only means of stopping the carnage to weaponize his prototype?

Foreign intelligence agencies realize the top-secret breakthrough is priceless. One particular spy leads the race to seize the invention. A psychological master of the long game, espionage, and extortion, he has only rule according to Kung Fu: win.

Friend and foe alike confront this psychotic mastermind. All will fear him, but is their fear real? Only the next six minutes will tell . . .