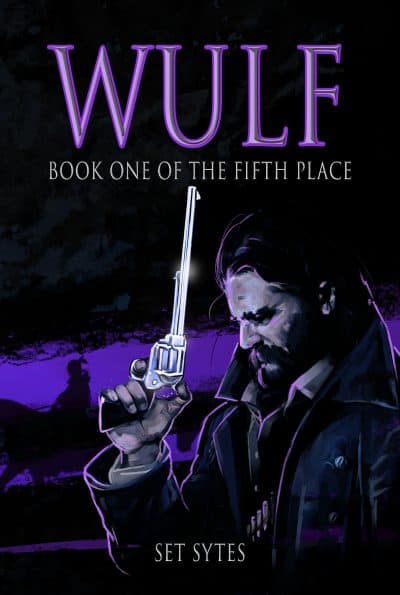 A man wakes up on an alien planet, in someone else’s body, with a gun to his head, in the beginning to this diverse, irreverent ,and tragic Weird West sci-fantasy series.

A man wakes up on an alien planet, in someone else’s body, with a gun to his head.
They call him Jay Wulf—gunslinger, brutal warrior, womanizer and murdering bastard – and he is having a bad day. He must understand and survive the perils of a savage new world, a world of purple skies over canyons and prairie, where everyone and everything—be they outlaws and mountain men, or monstrous creatures of the dark, seem to want him dead.

And if that wasn’t problem enough, a man with green eyes is hunting him, a man from another dimension who will stop at nothing to put the universe right.

The Fifth Place is about the universe under mysterious control, and the group of antiheroic misfits determined to survive it and be free no matter what comes. Ideal for fans of Stephen King’s The Dark Tower books, Garth Ennis’s Preacher comics, Joe Abercrombie, and the Farscape TV series, The Fifth Place is for those who want a pull-no-punches, adult series merging western, sci-fi, gritty fantasy, dystopian, adventure, and horror genres, with a diverse, irreverent, and tragically flawed cast of characters to root for against all odds.