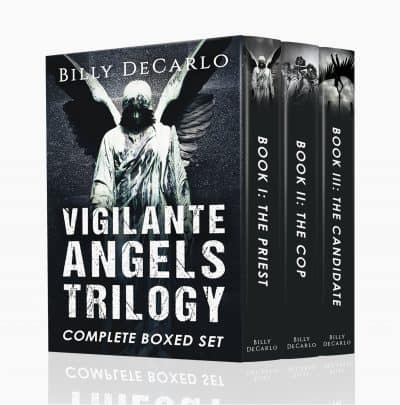 Tommy, a terminally ill retired cop and former Marine, turns vigilante in an attempt to redeem his past misdeeds. He’s angry at those who perpetrate evil upon others. He’s got a list. Get all 3 books in the Vigilante Angels series!

Tommy Borata, a terminally ill retired cop and former US Marine, turns vigilante in an attempt to redeem his past misdeeds. In an effort to become a better person, he tries to purge himself of his prejudices while battling his late-stage cancer diagnosis.

Tommy befriends Moses, a fellow patient. They share their distaste for those who perpetrate evil upon others and decide to team up and do something about it. Their target is a priest who’s been accused of child abuse—but Tommy’s fight against evil may come closer to home than he imagines.

Tommy finds himself fending off an investigation led by a brash and corrupt cop. He finds an unlikely partner in his son’s former martial arts instructor, a fellow cancer patient who has his own demons and motivations. As Tommy’s disease progresses, the cop zeros in on him and the people he loves. What will finally give?

Tommy is in hiding with his faithful dog and the memories of those he has recently lost. He is prepared to allow his disease to claim him, to die in peace. Or so he thought. From his sparse tropical bungalow, he begins to follow the meteoric rise of a politician that stands for everything he despises. He sees one last opportunity to realize his original vigilante charter—to truly make the world a better place, particularly for the unfortunate. He battles his cancer, investigators, and many obstacles to complete one last mission. In the race against time, which will prevail?