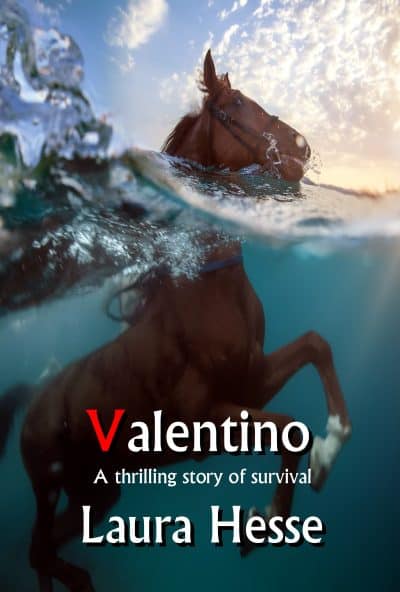 “A magical survival story with two shipwrecked teens, a guide dog, and an abandoned horse” (Amazon Review). Inspired by a true story.

Two worlds collide when a Native boy and a blind girl are shipwrecked on opposite sides of a desolate island in the middle of winter.

While the young blind girl, Maddie, must rely on providence, her faithful guide dog, and an abandoned horse to help her survive, August has a wealth of cultural heritage and survival skills to draw from. All too soon, Maddie’s luck runs out and her sense of humor and unending never-quit attitude fail her, leaving her to wonder if she can carry on. Her prayers are answered when the horse she has named Valentino leads her to the meadow where August is setting snares. August is enchanted by the pretty teen, quickly embracing the role of sole provider, until roles are reversed after a tragic accident leaves August in dire need of medical attention.

Inspired by the true story of Will, the horse that got left behind on Jedidiah Island when it was donated to B.C. Parks and a woman who survived for ten days after being shipwrecked on a remote coastline in Haida Gwaii.

What people are saying about Valentino:

“A wonderful story of survival and the human spirit, and a must read for all ages.”

“This book is so much more than I expected.”

“Laura Hesse is a talented author who combines children with varying disabilities with horses symbolic of service animals. The characters and world building is strong and pulls you along with the characters’ struggles for survival with innocent hope. A fabulous addition to this immaculate stand alone series!”