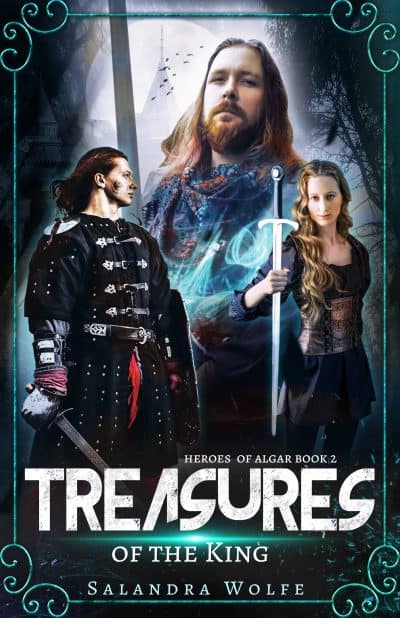 Treasures of the King (Heroes of Algar Book 2)

Long forgotten magic might help Caspian weather the coming storm . . . or it could spell out his kingdom’s doom.

After a coup nearly destroyed his kingdom, King Caspian of Algar isn’t sure who he can trust. So when a woman, scarred from the evil wizard Devin’s dark reign, knocks on the door of his heart, will he let her in? And why do her probing questions disturb High Wizard Charwin so much? Caspian isn’t sure it matters, because no matter what he does, he can’t stop himself for falling for her.

Meanwhile, Ryland and his cousin Devin are working hard to ensure the destruction of “King” Caspian, and they’ll stop at nothing to enact their revenge, even if that means enslaving an entire kingdom to do their bidding. Despite their united goals, Ryland isn’t sure he can rely upon Devin and his non-human family members. Their hatred of humans seems beyond reason, but perhaps there’s a way to ensure their loyalty . . .

As both parties dream up ways to destroy the other, something else is coming, a form of magic that could destroy everything they’ve fought for. Secrets hidden within the castle inhabitants and Algar’s history might help Algar weather the storm . . . or they could spell out the kingdom’s doom.

Will Caspian uncover the truth before it’s too late?