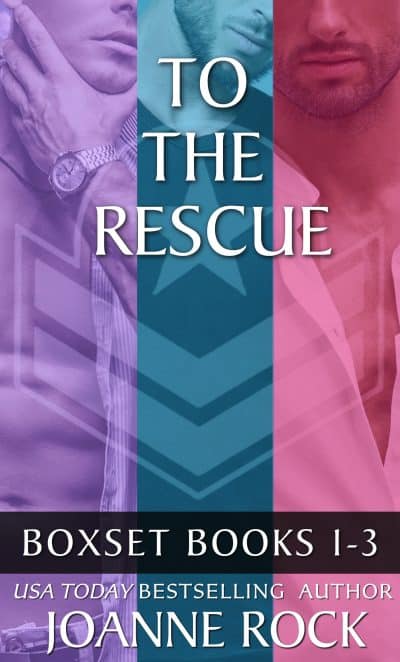 Celebrate military heroes in To the Rescue! The series kicks off with an ex-SEAL in San Diego, then heads to a Coast Guard base in Puerto Rico, before winding up in Virginia Beach where a recovering Navy hero protects the professor next door.

Renegade
He’ll break all the rules . . .

Former SEAL Rocco Vitelli has every intention of exposing the con artist who took advantage of his father, no matter that his quarry is a self-styled sensuality maven. But when he goes undercover to learn more, his mission takes a turn for the hotter.

Jessica Winslow can’t believe the stud who volunteered for her massage demo isn’t who he claims, especially since she’s seriously attracted. But when she discovers she’s the victim of identity theft, Rocco is determined to help. She’ll need the formidable ex-SEAL to keep her safe with someone impersonating her and her past coming back to threaten the new life she’s built, but can she trust what she feels for him?

Wade Craig is on the lookout for illegal activity, not gorgeous tourists. So when Lacey Sutherland shows up in the bar he’s staked out to keep tabs on a suspected smuggler, Wade’s guard is up.

Lacey is a professional matchmaker, not a drug runner. But with her business tangling her in something dangerous, she has no choice but to turn to the one man intent on keeping her safe. Lacey’s every instinct warns her the sizzling connection won’t last. Because for Wade, duty and desire don’t mix . . .

Explosives expert Navy Lieutenant Finn Riddock might be on enforced leave from duty, but that doesn’t mean he’ll walk away from the trouble brewing next door. Especially when his sexy professor neighbor is receiving escalating threats.

Nikki Thornton is trying to restore the home of a literary luminary before she opens it to the public, but someone in the neighborhood is determined to stop her. When Finn insists on offering his protection, Nikki can’t deny the combustible attraction. But as their time together ticks down, secrets from the past are set to detonate . . .