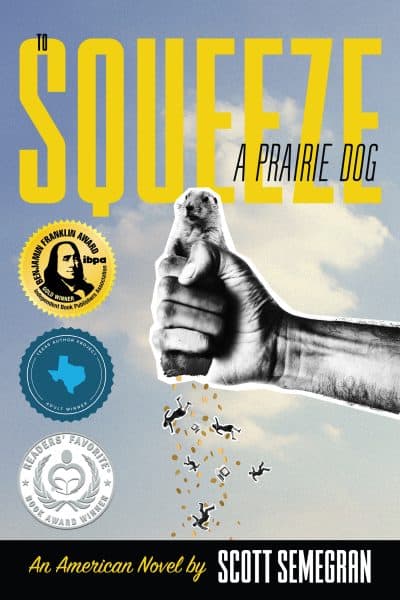 To Squeeze a Prairie Dog: An American Novel

From award-winning writer Scott Semegran, To Squeeze a Prairie Dog is an American, modern-day tale with working-class folks—part fable, part satire, and part comedy—revealing that camaraderie amongst kind-hearted friends wins the day over evil intentions.

This is the story of J. D. Wiswall, a sincere young man from a small town who joins a state government agency in a data entry department comprised of quirky clerks. Quickly endearing himself to the diverse group in Unit 3, J. D. learns his coworkers have a pact to share the $10,000 prize if they win a cost-savings program for a suggestion that could save the government money.

A multi-million dollar cost-savings suggestion is accidentally discovered by J. D.’s supervisor, the goof-off alcoholic Brent Baker. This lucrative discovery catches the attention of crotchety Governor Dwayne Bennett, a media-hungry demagogue, who turns the coworkers of Unit 3 into props for his selfish political reasons. The publicity surrounding the clerks piques the interest of a newspaper reporter, Esther Jean Stinson, whose investigative reporting threatens to reveal the governor’s career-ending secret, as well as jeopardizes the prize that the clerks so desperately desire.

A few blocks away from the agency that houses Unit 3, Governor Bennett, a smarmy politician who whizzes around the Governor’s Mansion on a gold-plated wheelchair, parades the unwitting clerks in front of the local media in an attempt to raise his sagging poll numbers. But reporter Esther Jean sees through the governor’s bald-faced motives and uncovers secrets not meant to be revealed. Will her revelations keep Unit 3 from receiving their elusive prize?

From award-winning writer Scott Semegran, To Squeeze a Prairie Dog is an American, modern-day tale with working-class folks—part fable, part satire, and part comedy—revealing that camaraderie amongst kind-hearted friends wins the day over evil intentions.