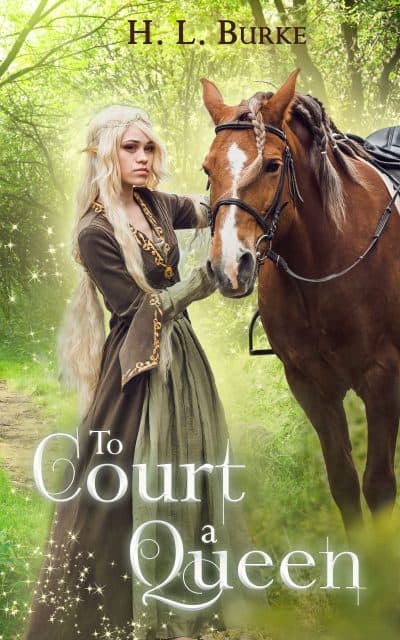 To Court a Queen

Devin doesn’t want to get married, but he wants to be a frog even less. Princess Bride meets Ella Enchanted with a LOT of snark, a cat-elf, and a knight who is way too Han Solo for his own good.

Devin doesn’t want to get married, but he wants to be a frog even less.

Knight errant Devin takes a shortcut through the woods, only to be captured by fairy forces. The fairy queen has run out of breathing males to fight for her hand, and Devin, while not ideal fairy stock, is breathing—for now.

Telling a vain fairy queen you’d rather not be her one true love is a ticket to life on a lilypad, so the knight agrees to face three challenges to win Queen Agalea’s hand. When a clever servant girl offers to help him navigate the trials in order to stop the constant bloodshed of the courtship ritual, Devin jumps at the chance.

Cat-elf Sevaine’s only goal in life is to stop Agalea from killing off every male she gets her hands on. When cocky but quick-on-his-feet Devin stumbles into her world, she may finally have a champion who can beat Agalea’s cruel games—if she can resist falling in love with him herself.

With Sevaine’s help, Devin balances “flirting” with his “beloved” and overcoming tasks specifically designed to kill him. But even if he defeats Agalea’s challenges, will happily ever after be possible if he’s fallen for his new partner in survival?