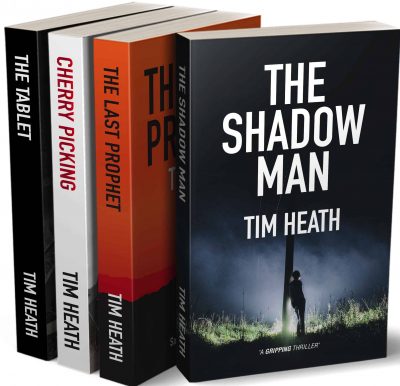 The Tablet
William Hackett finds himself in a system he doesn’t understand. He’s accused of a crime and the Russians want blood. His.

Somehow this peaceful father killed a man in cold blood. A man about to launch a groundbreaking piece of technology.

As political tensions rise, they will dance to a tune with the most sinister of crescendos.

Cherry Picking
Nigel Gamble is a man with everything—including a dark past. He took his name from his early business successes, but in reality, none of it was based on risk—only certain success.

Every decision Nigel has ever made in business, people, sport, or life had been based on some prior knowledge.

When a stranger appears it shakes his rich world to the core.

But Nigel has been waiting for him—and preparing.

Now it’s a fight to the death; there can be only one winner.

The Last Prophet
John awakes to find himself in a hospital bed with no memory of how he got there. Then the visions start. Destruction and death. A last chance. The only one who can save millions of people.

He is no hero.

Could he do what was being asked of him?

The Shadow Man
On the day the Chinese announce the opening of a state-of-the-art nuclear power station—decades in the making—three British spies disappear. Coincidence, or retribution?

With scores to settle—and a new technology to sell to the highest bidder—the Chinese will take no prisoners. And they know just who to turn to.

What readers are saying:

★★★★★ “A good murder story, well written and composed. It flowed really well and had believable characters, especially Anya, and I found it to be a real page-turner. The plot moved along, leaving me guessing who really did it and how, and really missed the obvious since I got so engrossed. Well worth reading and you won’t be disappointed. Keep up the good work Tim!”

★★★★★ “An excellent read; well researched; keeps you hanging until the end. Tim Heath is such a good writer. I look forward to reading more of his work. Keep them coming, Tim!”

★★★★★ “Loved this book. It’s action and mystery all the way. A powerful tale of a tablet to rival Apple and Samsung. Can it really do all that they claim? Is it worth killing for? . . . a powerful novel which I could not put down.”

The individual books have had over 250 5-star reviews—and counting!

Buy the Boxset and start a series you won’t want to put down!