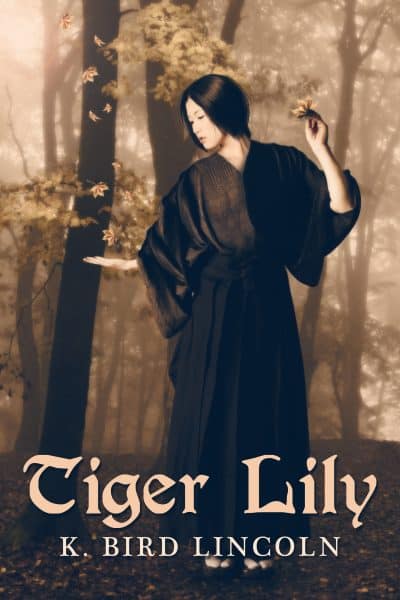 But Lily was born in the year of the Tiger, and can’t ever be like other village girls. In the woods snaring rabbits one day, she finds instead the Daimyo’s son, Ashikaga, wounded, in the gooseberry brush. When the Pretender Emperor’s men arrive to kill Ashikaga, Lily, desperate, sings a forbidden Jindo song.

The song wakes a powerful spirit—as well as Ashikaga’s interest. The prickly lord has hidden secrets of his own and a burning desire to prove himself to his father. He will stop at nothing to defeat his father’s greatest enemy.

All Lily wants to do is take care of her sisters. But the Pretender-Emperor’s forces are drawing near, and now the Daimyo’s son knows she communes with Jindo gods. She wants to trust Ashikaga when he swears he will not tell her secret, but he is a noble—and Lily only a peasant. Lily’s heart is leading her down a dangerous path. She may have to defy her father, Ashikaga, and even the spirits themselves in order to defeat the Pretender-Emperor’s magic and keep safe all that she loves.