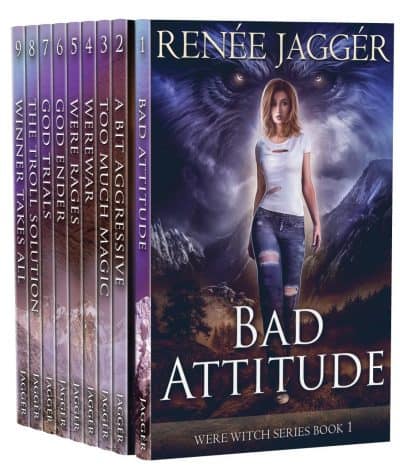 The Were Witch Complete Series Omnibus

Opposites attract and there’s nothing more opposite than werewolf Bailey and the witch Roland. Trouble is chasing the two of them and they have to learn to work together to fight it off and save the world.

Opposites attract and there’s nothing more opposite than werewolf Bailey and the witch Roland. Trouble is chasing the two of them and they have to learn to work together to fight it off and save the world.

Get the complete series – all 9 books – to join them on their battles against witches, tradition and the very gods themselves.

If Were tradition forced you to marry at twenty-five, would you do it?

Bailey Nordin is feeling the stress of pack obligations arriving too soon in her life.

She prefers working on cars to going on a date.

A good fight is just a morning’s workout, and Bailey’s sarcastic wit has killed any chance of a love life.

Roland is on the run from three powerful witches who want him for . . . what he can provide.

Trying to hide from the witches, he ends up in the middle of a town so small, it’s hard to find it on a map.

She’s a Were, He’s a wizard. He could be her ticket out of her problems—if she believed in magic.

Massive changes are coming down from the heavens, and Bailey Nordin is the Were in the middle.

Will she figure out how to break from tradition?

Included in this complete omnibus:

Join Bailey as she learns just how unique she is, and why the gods might want her.

“It’s like Romeo and Juliet . . . A Were and a wizard fighting kidnappers, gods, and a mysterious government agency that is trying to hide the paranormal from society.

You know what? It’s actually nothing like Romeo and Juliet.

Except no one wants those two together, especially the witches.”