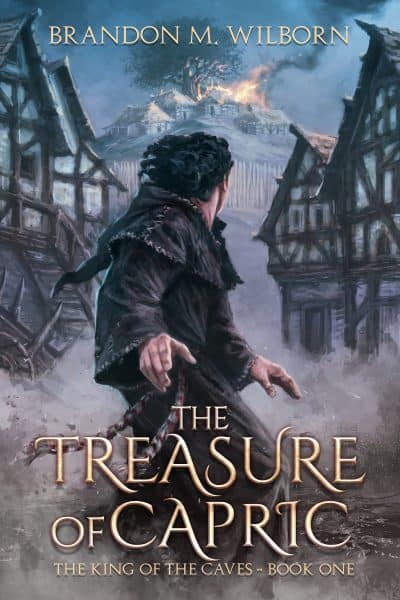 The Treasure of Capric (The King of The Caves Book 1)

A fabled treasure disappears. Can a failing order of warrior-monks stop a tyrant from gaining ultimate power?

When he was seven years old, Kurian Abramson entered training with the legendary Capric Monks, vowing to protect the Capric Treasure with his life. But he doesn’t know what he’s guarding. The treasure veiled in prophecy is a mystery even to the monks.

Every day of Kurian’s youth swings between brutal combat training and quiet study of the Order’s religious teaching. He knows the withering monastery doesn’t live up to the heroic legends he heard as a boy. But he longs to prove he’s worthy of the honor that protecting the treasure still affords.

But when an ambitious, tyrannical noble razes the monastery, they discover that the treasure is missing. Kurian must get it back or lose everything he trained for.

The only clue points to an outlaw known as the King of the Caves.

Guided by a female spy with a secret and hunted by the noble’s top officer, Kurian's journey becomes a race that pits him against soldiers, witches, and deadly mythical creatures. His quest will test his training, friendships, and faith.

Can Kurian restore the treasure? Or will his world fall under the curse of 1,000 years of darkness?

From the publisher:
The Treasure of Capric is a new, clean epic fantasy novel rich enough for adult fantasy readers, and clean enough for YA or teen fantasy audiences.

Readers have likened it to the epic heroes quest of J. R. R. Tolkien’s The Lord of the Rings, and the magical sword and sorcery of Terry Brooks’ Sword of Shannara Trilogy or The Wheel of Time Series by Robert Jordan and Brandon Sanderson.