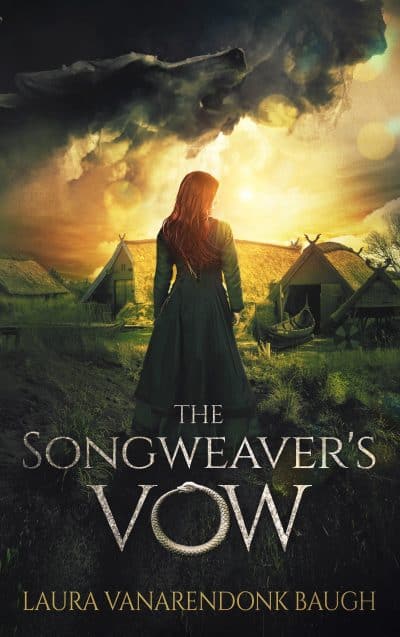 She tells Greek legends to entertain Norse gods—until one of her stories leads to murder. Now she’s alone in hostile Asgard, and Ragnarok is coming.

When Euthalia’s father trades her to Viking raiders, her best hope is to be made a wife instead of a slave. She gets her wish—sort of—when she is sacrificed as a bride to a god.

Her inhuman husband seems kind, but he visits only in the dark of night and will not allow her to look upon him. By day Euthalia becomes known as a storyteller, spinning ancient Greek tales to entertain Asgard’s gods and monsters.

When one of her stories precipitates a god’s murder and horrific retribution, Euthalia discovers there is a monster in her bed as well. Alone in a hostile Asgard, Euthalia must ally with a spiteful goddess to sway Odin himself before bloody tragedy opens Ragnarok, the prophesied end of the world.

“A lyric course in Norse mythology, packed with heart and wit.” —Kirkus Reviews

“In this expressive banquet of love, legends, and exploits, VanArendonk Baugh channels the charm and grandeur of the Norse pantheon effortlessly . . . Overall, a tale for everyone—especially those who love a mix of superheroes, romance, and monstrous action.” —Kirkus Reviews

“Laura VanArendonk Baugh can hold her own with the greats! … It’s exciting, romantic, unpredictable, and heartwrenching. There were plenty of Gasp Out Loud moments and even a few tears . . . everything I want in a read, really!” —Sylvia Mercedes, reviewer

With an epic cast of characters including Odin, Thor, Freyja, and Loki, and a magnificent harmony of Greek and Nordic mythology, this tale will appeal to readers of Neil Gaiman, Stephen Lawhead, and Mercedes Lackey.