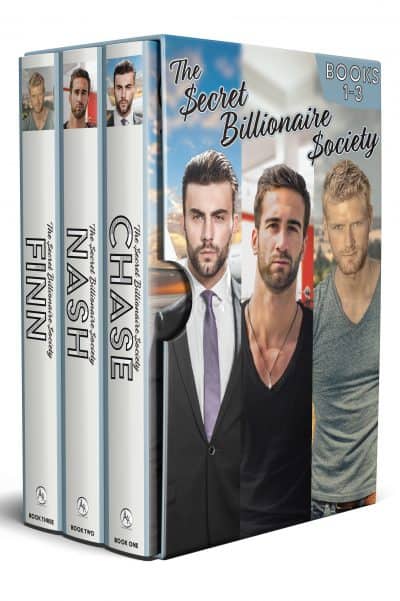 If you like fun, fast-paced adventure and romance then you'll love this intriguing series. Six billionaires. One unforgettable birthday bash. Now their livelihoods are in the hands of a stranger.

The boxed set of The Secret Billionaire Society includes:

Chase
Chase Young just handed his fortune over to a stranger but may never get it back. Can he save it by completing his mission? Unable to use money to fix the problem, he’s tasked to dig deeper into the airline’s problems. Chase never expects to meet Grace Edison, the owner’s daughter, and immediately wants her in his life. Undercover, Chase can’t tell Grace the truth. Never one to back down, he accepts the challenge ahead of him, win Grace and save her father’s company.

Nash
Easy-going Nash Gill is the second of the Society to receive his mission. Upset he won’t go undercover like his friend, Chase, he accepts the challenge half-heartedly. Vanessa, Nash’s ex, works with him at Gill’s gym. He’d rather spend time winning her back instead of flying to Pittsburgh to help a high school teacher fulfill his dream and back to hire the other assignment in Miami. Tasked with aiding these two men, he finds juggling them complicated and turns to Vanessa for help. Unaware of the danger which lies ahead, Nash’s desire for a mission impossible role comes true, and he now regrets ever wishing for one.

Finn
Golden boy Finn Larsson is the third of the Society chosen by the ominous, never-seen Smith for assignment. Sent to a sparsely populated area of California, he’s tasked to save the Wilde’s ranch and amusement park from ruin. Upon his arrival, his gut reaction is to quit. After learning more from the elderly couple who own the land and run the park, he suggests they get a lawyer and file for bankruptcy or sell the property. Enter Charlotte Wilde, their lawyer daughter, from L.A. One look, and Finn is smitten. Save the Wildes becomes his motto.