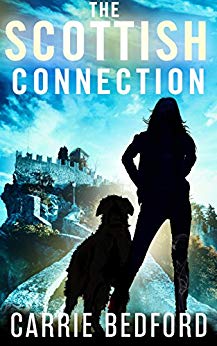 The festive occasion turns solemn when Kate notices an aura above the head of Josh’s Uncle Fergus. Blessed—or cursed—with the ability to see auras that indicate that death is imminent, Kate can sometimes avert disaster—if she can discover the source of the danger.

London architect Kate Benedict is off to a glamorous weekend party in Scotland at the formerly grand castle belonging to the uncle of her boyfriend Josh. And thus is the scene set for a deliciously traditional British cozy with a touch of the paranormal thriller—complete with ghostly characters from the past; the requisite medieval weapons collection; and a creepy, ruined, closed-off wing of the castle.

There’s also a vaguely menacing assortment of servants and locals and a castleful of dodgy houseguests, all wrapped up in mysterious gloom as thick as the Scottish fog . . . but warmed by a cozy library fire and a nearly priceless collection of single malt scotches.

The festive occasion turns solemn when Kate notices an aura above the head of Josh’s beloved Uncle Fergus. Blessed—or cursed—with the ability to see auras that indicate that death is imminent, Kate can sometimes avert disaster if she can discover the source of the danger. Otherwise, Josh’s favorite uncle will die in a matter of days.

Is Fergus suffering from an undiagnosed illness? Is the threat linked to the impending sale of the castle? Or is there a murderous secret buried in the past, with a deadly claim on the present?

In an attempt to sort out the nature of the threat, Kate takes a stroll to the loch and experiences a hallucination—a vision so real she feels she could touch the participants: a black-robed priest stalking a lovely young woman in 16th-century costume, as she clings protectively to a book. The woman holds the book out to Kate, as if asking Kate to protect it. Is the vision a message about the threat to Fergus?

As Kate and Josh race the clock to find the source of danger, the guests arrive, filling the house with known and unknown threats: townspeople opposed to the sale of the estate, the wealthy businessman who wants to buy it, scheming relatives with agendas of their own, and tales of treasures hidden in the castle.

And as the dangers increase, so do the number of auras Kate sees. She knows who’s in danger, but she can’t do anything to help unless she knows why!