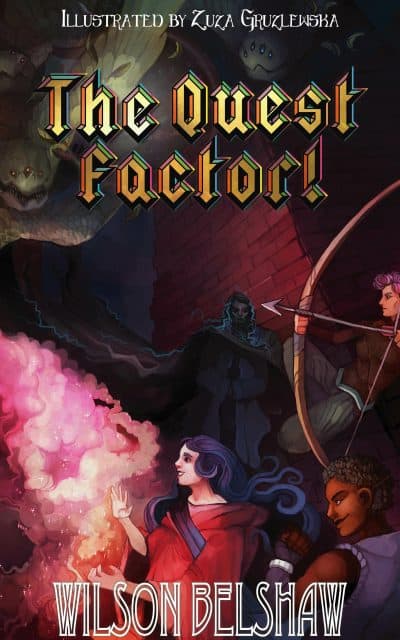 Welcome to the Tumultiverse, a world where death is no more inconvenient than a bad hangover. The Quest Factor follows an adventuring competition run by a sorcẽrer with the drive of Gandalf and the morality of a sewer rat.

The evil Darkun has once more returned to shroud the multiverse in unpleasantness. His ancient foe Smarman the Sorcerer responds accordingly—namely with a big budget reboot of The Quest Factor—an adventuring competition that pits hungry/desperate adventurers against one another.

On Tumultia, resurrection magic makes death no more inconvenient than a bad hangover. The adventurers of yore sought fame like rock stars—i.e. while drunk. Young upstarts like Eeffee Tsukino, however, seek glory by channeling selfies of themselves ‘glitter-bombing’ monsters onto Instanomicon.

Eeffee’s talent for generating ‘buzz’ makes her Smarman’s first choice to fight Darkun. Less convinced is former Chosen One and current serving wench Grenny Gurbit. She’s unconvinced that a quest to save the multiverse should concern itself with ‘buzz’. She’s also suspicious about Darkun’s return given Smarman’s proclivity for engineering apocalypse-grade shenanigans in his favour.

Against her better instincts, Grenny signs up to coach her successor. It’s that or let Eeffee fend for herself against the forces of darkness; the machinations of Smarman, and the trollishness of the intermesh.

The Quest Factor is a satirical fantasy in the style of writers like Terry Pratchett, Douglas Adams, Neil Gaiman, and Robert Rankin.