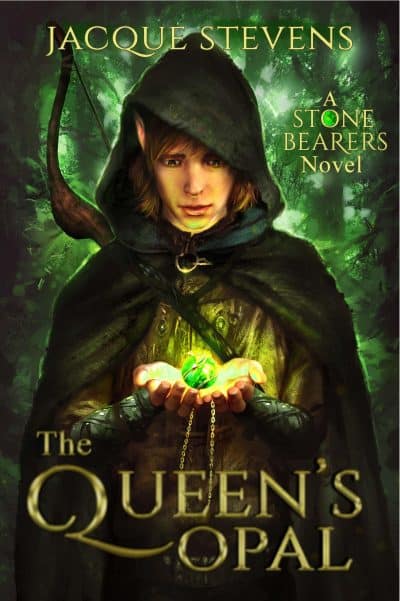 After their mother dies from a mysterious curse, two elves leave the forest to find answers and inadvertently restart an old war between elves and humans. New YA/teen fantasy for fans of Eragon and Shannara.

Elves never use magic or leave the forest.

They aren’t supposed to get sick either, but Drynn’s mother just died from a mysterious illness, which has targeted the elven queens for generations. With no female heir left, the symbol of the curse—a green stone called the Queen’s Opal—passes to Drynn. Unwilling to lose another family member, Drynn’s impulsive and overprotective brother drags him out of the forest to search for a cure. And the oft-diseased humans seem the most likely place to start.

But the opal isn’t all that it seems. Once outside the forest, it shows Drynn visions of the first queen—a time when the mortal avatars of the lost gods walked the earth and the humans and elves lived in peace. Much has changed in the human lands since then. It’s a darker world, ruled by power-hungry wizards who covet any kind of magic. Magic like the opal. Magic like the natural energy the wizards can see inside the elves.

More than healing one illness, Drynn’s visions call for him to restore the world’s former peace, but if the wrong wizard learns about the elves’ innate gifts, even the forest will no longer be safe.

Family bonds will be tested. Friends will become foes. With two kingdoms spiraling into chaos, can a shy bookworm conquer his fears to bring peace to the realm?

The Queen’s Opal is book one in a new high fantasy adventure series set in the same magical and exotic world as The Stone Bearers (2016).

This coming of age story will appeal to teen and young adult fans of the TV show Avatar: The Last Airbender, Cinda Willams Chima (The Demon King), Christopher Paolini (Eragon), and other works of epic sword and sorcery.

Clean Read. Fantasy violence and a few darker themes. Recommended for young adults and teens twelve and up.