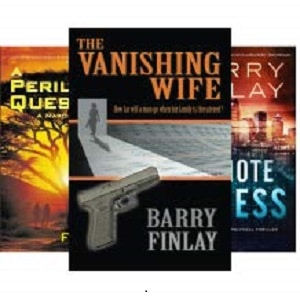 The first three books in this exciting series, featuring a strong-willed, independent and impulsive woman pitted against some of the worst mankind has to offer.

Mason Seaforth, a mild mannered accountant, wakes up the morning of his 20th wedding anniversary to find that his wife, Sami, has disappeared. A search of Sami’s computer uncovers a past she has buried for more than 20 years. Together with their strong-willed friend, Marcie Kane, he leads an investigation that takes them to a casino in Gatineau, Quebec. As the two close-in on Sami’s whereabouts, so do Aaron Marshall and his enforcer, Greg Johnson, AKA “The Force”—deadly serious men willing to kill the entire Seaforth family to protect Sami’s secrets.

Mason is thrust into a race against Marshall and Johnson, thrown into a life that is meant for other people. He must put his quiet job on hold and quickly learn how to handle a Glock 17. Each decision he needs to make is deadlier than the last, and a wrong move could result in the death of his family.

Marcie Kane, a strong and independent divorced woman, is on vacation in Tanzania, when her enjoyment is shattered: while visiting a dormitory she helped fund, a teenage girl asks her a perilous question—“When are you taking me to America?” Harmless as it may seem, Marcie realizes that, posed to the wrong person, this question could spell disaster for the girl and her friend. Her fears prove to be well founded.

As Kane discovers, the girls are victims of an international human trafficking ring centered at no place other than her home state of Florida. Her attempts to help, quickly spiral out of control, leading to deadly consequences. All the while, her independence is being challenged by the handsome FBI agent working on the case.

“My computer has been taken over by a foreign country”

A quiet Florida day is shattered for Marcie Kane and her fiancé, Nathan Harris, when they are faced with this question. The call comes from Annie Logan, a new friend of Marcie’s who happens to be the wife of the chief of staff to the president of the United States. While Annie’s personal problems bring into question her credibility, Nathan, a consultant with the FBI, soon confirms the threat is real and helps Annie convince her skeptical husband in Washington.

As the online threats grow, the impulsive president is determined not to listen to anyone, and especially not a hacker. The hacker is equally determined not to fail and risk damaging his reputation. Marcie and Nathan find themselves directly in the middle of a winner-take-all cat and mouse game where the stakes include the life of the president of the United States.