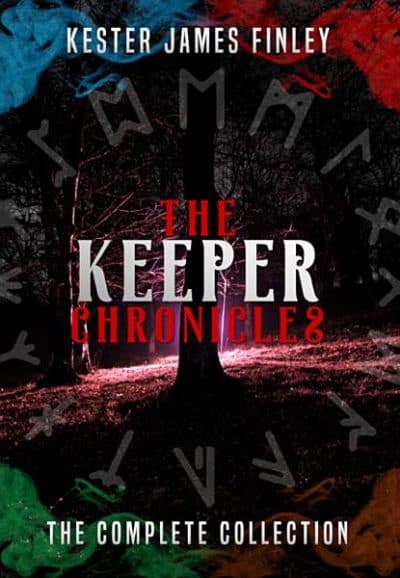 Supernatural evil and magic collide as the Keepers are pulled into an epic struggle to protect the veil between two worlds in this complete five book spell-slinging, darkness chasing, devilishly haunting adventure fantasy set in the modern world.

Join Truddie Mae, Gordy, Niles, and a complete cast of superpowered individuals as they battle a nefarious plot to destroy the universe as secrets uncover lies and friends turn to enemies. Danger lurks around every corner and, as the stakes are raised, the Keepers will need to join forces to face the greatest threats ever to slip into their reality. As the war rages on, will a thrown together family save the day, or will sinister plans finally prevail?

*Included in this set are all five complete eBooks of The Keeper Chronicles series as listed below. *

Pulled from her tranquil existence by the veil’s calling out for assistance, Truddie Mae will once again dive headfirst into terror forcing her to reawaken old wounds and explore old haunts.

Against a ticking monstrosity of devouring darkness, will she and the others stop new this threat, or will time run out for them all?

Twisted Reunions (Book 2): Three people can keep a secret if two are dead.

A simple excursion leads to a discovery threatening the Keepers on every level. Forced to act as leader, Truddie Mae must rally remaining teammates and dig deeper into the mystery of their magical lives. New threats and unseen forces strike back, this time with more bite.

Sometimes the past rises to the top no matter how deep you bury the bodies. Struggling to maintain the veil while dodging a conspiracy, will her group unearth the agenda meant to end them before it finally does?

Withering Haunts (Book 3): Danger has never been so close to home… safety never so far away.

With everyone a possible threat, fear, and suspicion rule the day. Driven by duty to protect the veil, doubts soon become ominous when a late-night phone call of panic ends up being the tip of an even darker iceberg waiting to sink them all.

New threats emerge, foes become friends, and truths become lies. A new global menace looms on the horizon. Can the remaining Keepers thwart the increasing danger or will nefarious plans finally bear fruit and force their magical lives to wither away?

Jagged Remains (Book 4): Sometimes, to stop unspeakable evil one must battle themselves…

Danger lurks behind every tree, every whisper. The veil is eroding while teammates remain lost. For Truddie Mae, abandoning safety for answers will soon find her plunging deeper into the magical darkness. As panic and desperation collide, will her magic find a way?

Sinister players are finally revealed, and the truth is earth-shattering. The battle to save our reality is reaching its darkest hour. Will they be able to stop a doomed future, or will they all become jagged remains of a broken past?

Frayed Endings (Book 5): For every start, an end. With every dusk, a new dawn.

As old friends offer help and plans unfold to keep two worlds apart, Truddie Mae will soon find that stopping the coming storm may be a losing battle for them all.

As the Keepers battle to prevent a universe ending disaster, they’ll learn that the coils of their supernatural lives are frayed on both ends and that sometimes the simplest of cuts are the deadliest.