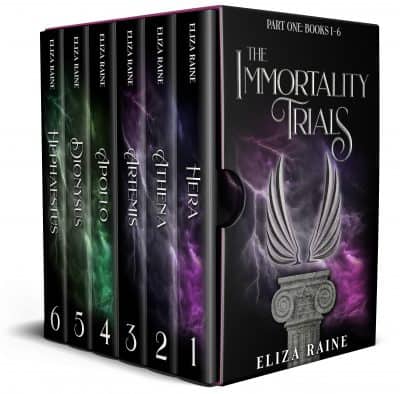 What if Hercules wasn’t the hero we all thought he was?

What if Hercules wasn’t the hero we all thought he was?

His daughter, Lyssa, knows just how cruel he can be. But she has left that life behind, and now her battered smugglers ship, the Alastor, flies under everyone’s radar—just how she likes it.

The Gods have a different plan for her though. They’re about to break one of their only rules and grant a worthy hero a chance to win the ultimate prize—immortality. And Lyssa and Hercules are two of the lucky heroes offered the chance to compete.

Twelve gods, twelve realms, twelve trials. And for Lyssa, they’re about so much more than an eternal life. They’re about facing the monster from her past and stopping him from becoming truly untouchable.

She never wanted to let the world know that she inherited some of her father’s immense power. But maybe it’s time to show them all. How else can she compete with giants, centaurs, demi-gods, monsters, warriors, and the strongest man in Olympus?