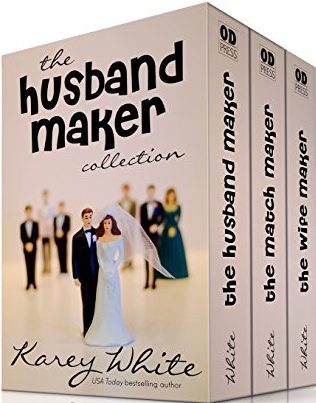 Charlotte’s called “the husband maker” and sadly, it fits. Every guy she’s dated since high school has gone on to marry the next girl they date. Not two or three girls down the road. The very next one. Will she ever find a true love of her own?

Charlotte’s a girl with nicknames. She may not love being called Charles or Chuck, but the hardest nickname to take is the one she was given in college, the one that’s followed her now for too many years. They call her “the husband maker” and sadly, it fits. Every guy she’s dated since high school has gone on to marry the next girl they date. Not two or three girls down the road. The very next one.
Is she doing something wrong or is she just cursed?
When Kyle Aldsworth enters the picture and sweeps her off her feet, Charlotte begins to hope that maybe she’s not destined to be single forever. A senator’s son with political aspirations of his own, Kyle’s wealthy, handsome, and in need of a wife. Will Charlotte be disappointed yet again, or will she finally be able to make a husband for herself?

It’s been six months since Charlotte and Kyle broke up, and the Husband Maker strikes again. Kyle is officially engaged, while Charlotte is still nursing a broken heart.

In an effort to get Charlotte out of her rut, she and her best friend decide it’s time for some good old-fashioned matchmaking. While Aleena arranges for Charlotte to meet up with a handsome Scottish tourist, Charlotte gets her two best friends together. But when sparks start to fly between Aleena and Angus, Charlotte is left feeling more alone that ever–at least until the charming Scotsman becomes more than just a safe, rebound guy and teaches her that maybe, just maybe, she can dare to open her heart again.

Charlotte has spent years as the husband maker, sending every guy she dates off to enjoy marital bliss with the next girl he dates. But things have now changed, and she’s determined to use her husband-maker abilities one last time–on herself. And she finally knows exactly who she wants.

Angus has loved Charlotte since they were teenagers, but he’s tired of waiting for her to realize how good they could be. She’s broken his heart one too many times, and it’s time to move on with his life. Maybe a position halfway across the country will be just what he needs to get over her. But when Charlotte won’t let him go without a fight, Angus has to decide if he’s willing to let her in again or if she’s too late.