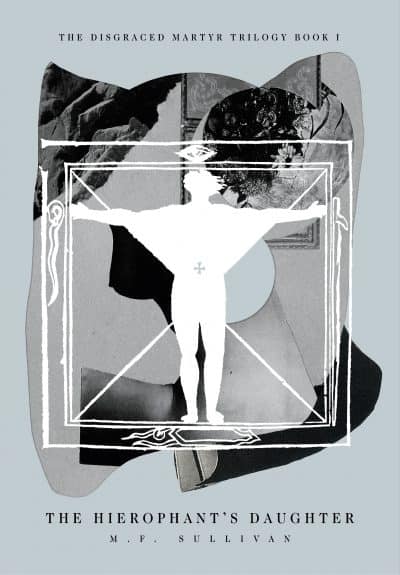 By 4042, the Hierophant and his army of cannibalistic martyrs have risen to global dominance. That same year, his daughter, General Dominia di Mephitoli, flees to resurrect her wife. The first in an LGBTQ+ cyberpunk/horror trilogy by cult author M. F. Sullivan!

The first in a bloody sci-fi trilogy like you’ve never read before: The Hierophant’s Daughter is a wild ride from the twisted mind of M. F. Sullivan.

“The Hierophant’s Daughter is a gripping read from start to finish. I highly recommend it.” —Tessa Dick, author of Philip K. Dick: Remembering Firebright & Conversations With Philip K. Dick

By 4042 CE, the Hierophant and his Church have risen to political dominance with his cannibalistic army of genetically modified humans: martyrs. In an era when mankind’s intergenerational cold wars against their long-lived predators seem close to running hot, the Holy Family is poised on the verge of complete planetary control. It will take a miracle to save humanity from extinction.

It will also take a miracle to resurrect the wife of 331-year-old General Dominia di Mephitoli, who defects during martyr year 1997 AL in search of Lazarus, the one man rumored to bring life to the dead. With the Hierophant’s Project Black Sun looming over her head, she has little choice but to believe this Lazarus is really all her new friends say he is—assuming he exists at all—and that these companions of hers are really able to help her. From the foulmouthed Japanese prostitute with a few secrets of her own to the outright sapient dog who seems to judge every move, they don’t inspire a lot of confidence, but the General has to take the help she can get.

After all, Dominia is no ordinary martyr. She is The Hierophant’s Daughter, and her father won’t let her switch sides without a fight. Not when she still has so much to learn. Be sure to read book II, The General’s Bride, available now wherever books are sold!