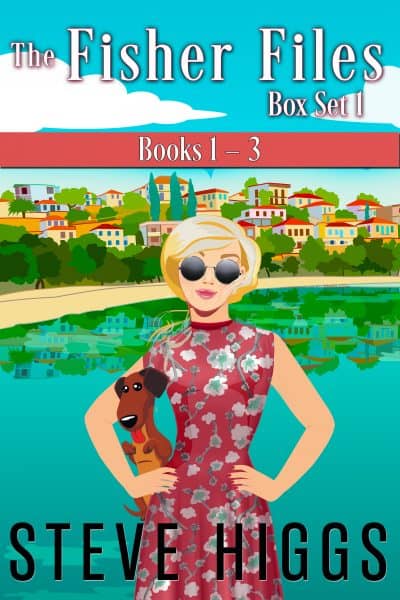 Patricia Fisher is over 50 and in over her head, but nothing will stop her from solving a mystery or catching the captain’s eye. Over 140 reviews on the individual books!

When Patricia Fisher finds her husband in bed with her best friend, she doesn’t react like most women might. But her hilarious and inspired flight from that situation results in this 50 something unfulfilled housewife taking an around the world cruise she really cannot afford.

The cost is soon a minor worry though, as one gin-fuelled pity party later, she is accused of murder and embroiled in the 30-year-old theft of a priceless jewel.

In our greatest challenges, we find our true strength, and Patricia is the best example of how true that is. Let her story make your heart soar as she shrugs off the ashes of her failed marriage and becomes the incredible woman she was always meant to be.

This 3 book boxed set will give you hours of mirth-filled, often pulse-pounding, cozy mystery with no cussing or smuttiness and no graphic descriptions of sex of violence.

The Missing Sapphire of Zangrabar
A thirty-year-old priceless jewel theft and a man that really has been stabbed in the back. Can a 52-year-old, slightly plump housewife unravel the mystery in time to save herself from jail? With only a Jamaican butler faking an English accent and a pretty gym instructor to help, she must piece together the clues and do it fast. Or when she gets off the ship in St Kitts, she’ll be in cuffs!

The Kidnapped Bride
A cruise ship filled with gangsters, a missing woman, and a new head of security who can’t do his job. What’s a middle-aged sleuth to do? Patricia just wants to spend more time in the company of Alistair Huntley, the offensively handsome captain of the Aurelia who seems only too happy to host her. But as the Aurelia sets sail from Miami, it does so with a dangerous new addition: there is a mob boss among the passengers and he’s on the run—from more mobsters!

The Director’s Cut
It’s well known that working in movies can be cutthroat, but no one expected that to be taken literally. It’s party time onboard the Aurelia! On the LA to Hawaii leg, a Hollywood film crew are shooting scenes for a new action movie and Barbie has been given a bit-part role. It’s all great fun, and Patricia isn’t surprised when her cute, blonde friend attracts the attention of the handsome A-lister male lead. But a body found in the upper deck pool soon had the sleuth back in action.