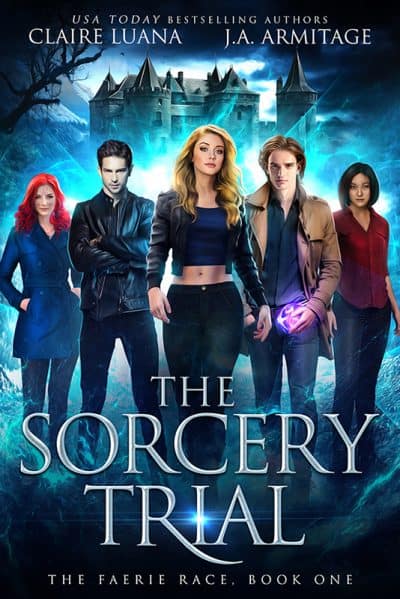 Welcome to The Faerie Race—an epic adventure through a realm as compelling as it is deadly.

The Sorcery Trial
Fame. Fortune. Your most extravagant wish granted. These are the prizes promised to the team that wins The Faerie Race, the first and only reality television show to venture into the dangerous realm of the fae. But that’s not why Jacqueline Cunningham wants in. She’s after any sign of her sister—who vanished without a trace into the faerie world two years ago. Jacq thought getting into the race would be the hard part. But she didn’t count on the other competitors—who will stop at nothing to finish first. Or her distractingly handsome jerk of a partner, who seems to be hiding secrets of his own.

Plunged into a world where everything wants to kill her, what starts as a hunt for the truth turns into a desperate contest for survival. Now that Jacq’s in the race, it will take all her wits to make it to the finish line alive.

The Elemental Trial
The Faerie Race has proven more grueling and deadly than Jacqueline thought possible. With one trial down and two to go, it seems the reality show’s producers will stop at nothing to get their ratings—even murder.

It will take all of Jacq’s cunning to get through the next trial unscathed, but all she can think about is her discovery that her sister is alive. Too bad her search for answers has only left her with more questions.

Forced to work side-by-side with their beautiful and duplicitous competition, Orin and Jacq are plunged back into a magical world filled with bizarre creatures, far-reaching conspiracies, and not nearly enough to eat. Each challenge brings the two of them closer—but that just means they have more to lose.

Will Jacq be able to reach the final checkpoint with her heart and her life intact, or will The Elemental Trial prove too daunting?

The Doomsday Trial
The final trial of the Faerie Race has arrived: a head-to-head battle through the streets of Elfame city.

Only the unexpected reappearance of her long-lost sister keeps Jacq in the game, but Cass’s presence comes with troubles of its own. The ancient Brotherhood is closer than ever to carrying out a twisted plot that would mean an end to modern human civilization. There’s one slim chance to foil the Brotherhood’s plans, and only Jacq and Orin have the means to do it.

Thrust into a lethal final showdown that’s more game than race, Jacq and Orin quickly realize that the odds are once again rigged against them. And worse, their enemies have thrust those they love into the cross-hairs. The clock is ticking. Jacq and Orin have one slim chance to foil the Brotherhood’s plans and win the race, or they’ll lose more than just the competition. They’ll lose everything and everyone they hold dear.

The Fae Chase
Auberon’s escape into the human world was never going to be easy, but running into Cass, a farm girl from Montana, was never part of his plans. Not that being chased through strange and new countryside by a group of killer faeries was something he set out to do either. With the faerie King’s henchmen hot on their trail, Auberon and Cass have to get to freedom, even if it means heading back into the fae realm to do it.