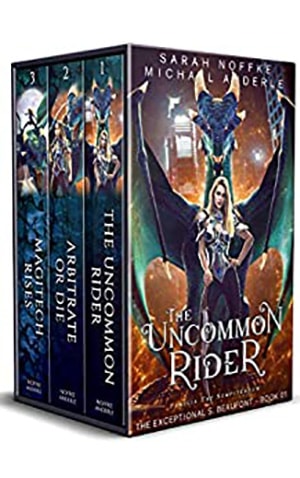 The wildly popular Exceptional S. Beaufont series Books 1-3 in one GIANT ebook. Here’s your chance to read the first 3 books for one low price! It’s the series readers are calling a “Great Ride!”

The Uncommon Rider
The first dragon rider in over a hundred years has been born.

Never before has a female been chosen to ride a dragon.

The Elite, a guild comprised exclusively of dragon riders, is dead according to most. No one has seen a rider in decades. The problems they used to fight overwhelm the world. Dragons are thought to be near extinction.

It’s just that a bunch of crusty, old men who do nothing that benefits the world at large are easy to mistake as useless corpses.

Sophia Beaufont is about to change all of that.

When the dragon egg that magnetized to her hatches, it sets Sophia on a new course. The Elite are immediately notified. She’s expected to train. To defend. To fight.

Sophia is ready to conquer evil, as the dragon riders should have been doing for centuries.

However, the Elite have been turning a blind eye, allowing the world to be overrun by criminals.

That’s all about to change.

S. Beaufont isn’t a girl who will be told to sit down and relax when a war is brewing that only a dragon rider can extinguish.

Eggs are rare. The dragons alive are in danger.

All because of one man.

Thad Reinhart doesn’t just want dragonriders gone because their role as adjudicators threatens his businesses. His grudge is personal. But there’s one thing he didn’t anticipate.

She is modern. She thinks differently. And she definitely doesn’t look like a dragonrider. And when it comes to tackling challenges, Sophia uses new world thinking for old world problems.

Will it be enough to beat an evil bent on destroying the planet?

Only five dragon eggs are left in the world.

After they are gone, dragons and riders will be gone forever.

Unless one woman can change everything. The only problem is that Sophia Beaufont doesn’t know what to do.

Magitech is seeking to ruin the world.

Everything hangs in the balance and not even Mother Nature can fix things. However, something is being orchestrated behind the scenes and S. Beaufont strangely feels like it involves her.

Can she help to save the Dragon Elite?

Will magitech destroy the planet?

Find out by scrolling up to grab your copy of The Exceptional S. Beaufont Boxed Set 1 now!

If you love dragons, and the special people who ride them, then you’ll LOVE this action-packed dragon rider series!