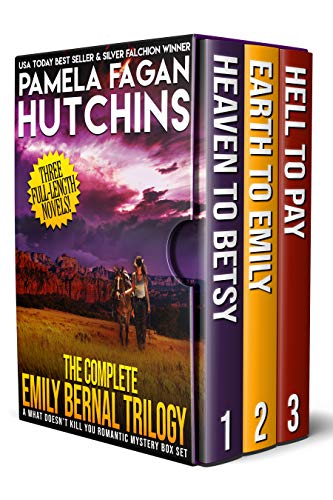 Sparks fly as ex-cowgirl & down-on-her-luck paralegal Emily Bernal struggles through a series of murders, messes, & men in a trio of mysteries perfect for fans of Janet Evanovich. “Emily is a HOOT and so real!” From USA Today bestselling author Pamela Fagan Hutchins.

A criminal attorney with a soft spot for lost causes.

Can ex-cowgirl Emily solve the mysteries before the killers ride off into the sunset?

Heaven to Betsy
Dumped by her husband for a man, ex-rodeo queen Emily Bernal yearns for a fresh start. When a handsome local attorney named Jack offers her a gig, she’s not sure if it’s the right fit. But after a dead body takes a swan dive right in front of her and she learns a missing six-year-old girl is caught in the aftermath, Emily’s heart sends her from barrel racing to paralegal work in a hurry. A string of strange coincidences don’t seem to add up, sparks fly between her and her boss, dead ends start to become dead bodies, and the race to save the girl comes down to the wire.

Earth to Emily
Emily may have traded the fast-paced rodeo world for paralegal work, but the change hasn’t made her life any simpler. Between romancing her sexy, attorney-boss, Jack, and fighting for custody of her foster child, she wonders if riding a bucking bronco would be easier. But when two runaway teens beg for her help after witnessing a truck-stop murder, the former rodeo queen springs into action. As she follows the clues along the Texas interstate, she can’t help but notice her boyfriend is hiding something from her. When the investigation turns deadly, Emily’s only chance to keep the runaways alive is to stand toe-to-toe with a criminal conspiracy that could make her the next victim.

Hell to Pay
Emily Bernal feels like she’s finally living her happily-ever-after. Weeks away from marrying her sexy boss and adopting the little girl who stole her heart, she thought nothing could break her stride. At least until a dead man face-plants into an anatomically correct novelty cake and Emily’s friend is charged with murder. As she follows the crumb trail of clues, Emily must infiltrate a venomous cult and clash with her one and only nemesis.