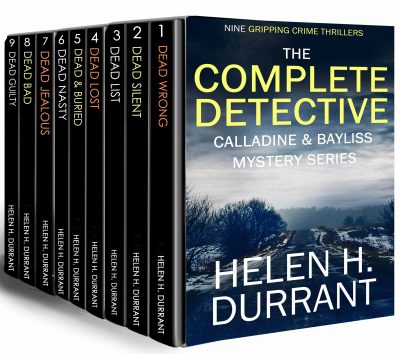 Do you love gripping crime fiction? Then get this box set now! 9 mysteries full of great characters and twists and turns. Over 3,000 reviews on the individual books!

Do you love gripping crime fiction? Then get this box set now! 9 mysteries full of great characters and twists and turns.

You get nine enthralling mysteries in the incredible value box set.

Dead Wrong
When a bag of severed fingers is found in the playground by a rough housing estate, Calladine and Bayliss race against time to track down a killer before the whole area erupts in violence. Their boss thinks it’s all down to drug lord Ray Fallon, but Calladine’s instincts say something far nastier is happening on the Hobfield housing estate. Can the duo track down the murderer before anyone else dies and before the press publicizes the gruesome crimes?

Dead Silent
A body is found in a car crash, but the victim was already dead . . . Calladine and Ruth Bayliss race against time to catch a vicious serial killer. The first two victims are American university students and both have livestock tags fixed to their earlobes. Who wanted them dead and what’s the connection? The detectives piece together the forensic evidence and track down the witnesses, to reach a shocking conclusion.

Dead List
An unlikely serial killer with a bucket list of victims . . . Calladine and Bayliss battle a murderer who is working their way through a list of victims. Each murder is meticulously planned and unique, and a tarot card is left at the scene of the crime. When two children disappear in the local area, the stakes are raised and the team are baffled by the link between the crimes. Calladine and Bayliss race against time to prevent any more carnage.

Dead & Buried
Annie Naden and her husband buy a remote country cottage at auction. It’s the home of their own they wanted, but as they begin renovations, Annie discovers a schoolgirl’s satchel in a dusty old hidden cupboard. Inside are the usual schoolbooks, now over 40 years old, and a girl’s diary. Among the record of day-to-day crushes and pop concerts is a secret that may have had terrible consequences. What happened to that girl forty years ago? And what’s it got to do with the current crime wave?

Dead Nasty
A girls body is found in a dustbin. “Dead Meat” is written on a note found with her. When another girl goes missing from the same group of friends, Calladine must look elsewhere for the killer and comes across a sinister online predator who was in touch with all the girls.

Dead Bad
A woman’s body is found in a disused church, a homemade stuffed toy by her side. The victim had been dumped there months ago. The crime has the hallmarks of twenty-year-old case whose alleged perpetrator is in prison.

Dead Guilty
Detectives Calladine and Bayliss hunt for a missing child in a mystery with a shocking ending.

Sophie Alder is the three-year-old daughter of local factory owner, Richard Alder. Richard and his wife, Annie, are locals from the rough housing estate who’ve made it big.

What readers are saying about Helen H. Durrant’s books

“Would highly recommend you read the whole series.” —Tracy

“I thought this was a really exciting thriller with some great characters.” —Angie