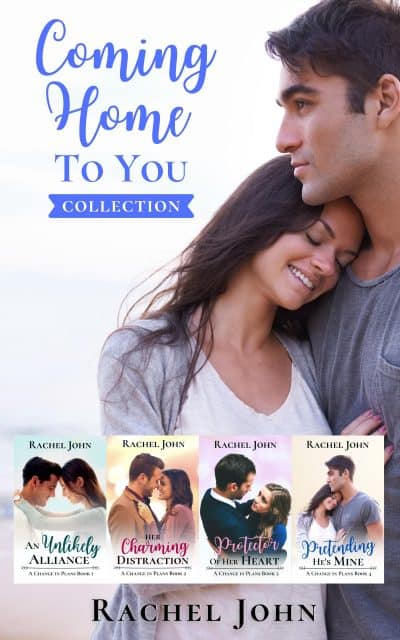 The Coming Home to You Collection: A Change in Plans Books 1-4

Four sweet novels filled with friendship, family, and unexpected romance. This complete series follows connecting characters you’ll fall in love with as they get their happily ever after, one love story at a time.

Four sweet novels filled with friendship, family, and unexpected romance. This complete series follows connecting characters you’ll fall in love with as they get their happily ever after, one love story at a time.

An Unlikely Alliance
Two strangers, one impossible situation, and the little girl who needs them both . . .

Preston Ford is used to taking charge, and though it will turn his life upside down, he steps up to parent his niece, Ella. It’s the right thing to do. What he doesn’t expect is his niece’s long-time nanny to come along. She’s a vital part of making things work, but a distraction he wasn’t counting on.

Her Charming Distraction
In this classic tale of love or money, could they be better together?

Paige Parker is too busy working to ever find love, and she’s just fine with it. But then she meets Shaun Randall. After saving her from an epically bad blind date, their paths keep crossing until she can’t help giving the guy a chance. The only problem? He wants to buy the next house she plans to renovate and flip, and her business has always come first.

Protector of Her Heart
When do you risk a friendship that means everything, for a chance at something more?

Chase Reynolds knows he’s firmly in the friendzone with his coworker, Ashley. He’s been her listening ear after every breakup, including the last one, a guy security had to be warned not to let in the building. And after walking her out to her car every night for more than a year, it’s time to accept things will never change. But after hearing their department’s about to be eliminated and they’re all getting fired, he’s throwing caution to the wind . . .

Pretending He’s Mine
They’re not supposed to get attached, but feelings don’t follow rules . . .

Lina James has been coaxing flirtation and small talk out of her gorgeous gym partner a little at a time, day by day. Which is why she’s shocked when shy and quiet Dillon up and asks her to pose as his girlfriend for Thanksgiving. According to Dillon, his family can be a little hard to handle, and he’s hoping Lina can draw some attention away from their other Thanksgiving guest, the girl his brother hopes to marry.

Dunked by Love: A Short Story
Enjoy this box set bonus, not found anywhere else.

Trent might think she’s the one who got away, but Emery’s never letting him break her heart again. But if he’d like to try? Well, she’s got an assignment for him no one else wants: sitting in the dunk tank at her work’s carnival.